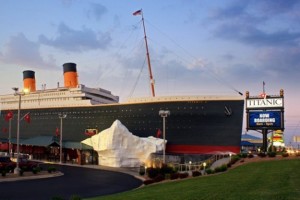 The Titanic Museum Attraction towers over the Branson Strip

Excitement, fun and adventure are not normally things a kid would think of in connection with a “museum,” but, based on my recent visit to the Branson Titanic Museum Attraction. I would have to say, “Kids, that’s just not the case aboard the Titanic.” Those who know I am a 73 year old grandfather who has lived in Branson for about 28 years might ask, “How can you say that? You’re not a kid?” Absolutely right, but thanks to a little “Titanic magic” and the patience and knowledge of First Class Maid Jamie, I was allowed to take a voyage on the Titanic and experience its adventure “through the eyes of a a “kid.” 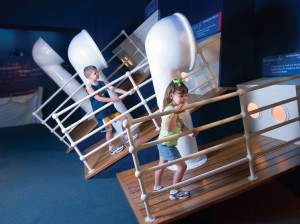 Do you think that you could walk on the decks of the Titanic as she tilted upward prior to sinking?

Let me share a portion of my “voyage” with you by sharing a list of 13 things that I discovered and believe would be helpful to every child, parent, grandparent or guardian in considering a “voyage” aboard the Titanic:

1. It’s fun, educational and full of surprises and neat things to see and do.

2. The entire ship is non-weather dependent, climate controlled and open rain or shine, heat or cold.

3. It’s easy to find and doesn’t look like any other museum you have ever seen. Just look for the “big ship” plowing through the water as it towers above the Branson Strip.

4. There were 133 children on board the RMS Titanic. Each had a boarding pass.

5. As you board the ship for your voyage you will receive a “Special Child’s Boarding Pass” with the name and information of one of the children who were on the Titanic on the front and a neat “Scratch Off Game” on the back that you can use to test your Titanic knowledge as you tour the ship. My Name was “Frankie Goldsmith” and I was nine years old.

6. As you enter the ship don’t forget to rub the “Iceberg” three time for luck. Wow, was it ever cold. 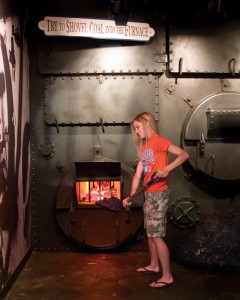 Another of the interactive fun activities aboard the Titanic.

8. While on the tour you can go on a “Scavenger Hunt” at the same time by checking off the items on the Scavenger Hunt game you will get when you get your boarding pass. No prizes or anything, but it sure is fun. Ok, I’ll admit it, First Class Maid Jamie helped me a little.

9. Each of the crew members of the Titanic is dedicated to making sure that you have a great time while on board the ship. They will be found throughout the ship “role playing,” sharing information and telling stories about the Titanic and its passengers as they interact with you and the other passengers. I found that they absolutely love it when someone asks them a question and boy do they ever know what they are talking about. If you meet First Class Maid Jamie ask her if she will share the “Iceberg” poem with you.

10. Up until recently there was only one audio tour and it was for adults. Now there are two and you will have your own “Youth Audio Tour” taking you on your own special tour of the ship complete with mysteries, clues, sound effects and music. It added so much excitement to my tour and literally brought the ship and some of the things I was seeing to life. One of my favorites was when I got to actually feel the hull of the ship, its thickness and run my hand over the rivets as the “Hull” talked to me and told me what it was like after it was hit by the iceberg and how hard it tried not to break apart.

11. You will get to meet “Polar, the Titanic Bear,” first in association with one of the children on board, seven year old Douglas Spedden, and later in an up close and personal encounter that will be one of the many highlights of your voyage.

12. You will have the opportunity to send Morse Code, experience what the passengers experienced as the angle of the decks rose higher and higher as the ship sank and other interesting activities. How long do you think you can hold your hand under water that was the same temperature that the passengers aboard the Titanic experienced?

13. Imagine walking up and down an exact full sized replica of the top two floors of the Titanic’s beautiful Grand Staircase. It’s even more dramatic when you realize that you are walking up just the two top floors and that it extended another five floor down into the ship.

I could go on and on, but let me close this piece by sharing something that First Class Maid Jamie shared with me. She explained to me that one of the major purposes of the Titanic Museum Attraction

is to honor the memories of the those who were on the Titanic saying, “We really do believe that when someone passes on, the best way to honor them is to simply tell their story and we get the honor to do that every single day.” It is the way they tell those stores that both honors those who sailed aboard the RMS Titanic and provides a dignified, unique and fun filled experience for todays “passengers” to remember what happened that night and realize that there is a person behind each of those stories.