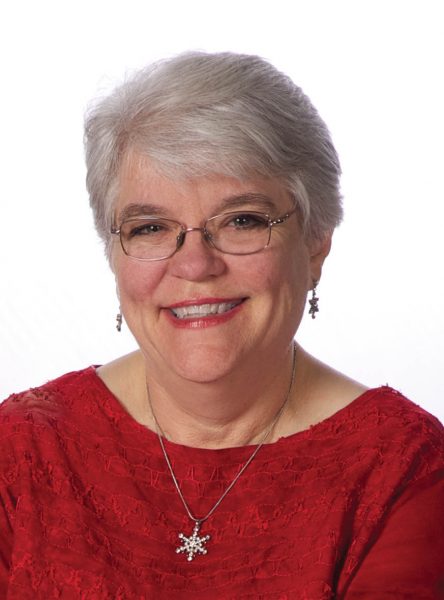 Lena Hughes, the blessed and proud Mom, Mother-in-Law, and Grandmother of the Hughes family.

It is certainly no exaggeration to say that the “M & M” of the Hughes brothers, first, and still, as their Mother and, for over two decades as their Manger, Lena Hughes has been with them, on their inspired journey, since the very beginning. Lena’s five extremely talented sons, their talented wives, and children, make up the “world’s largest performing family,” and star in two of Branson’s most popular shows, it starring the Hughes Brothers and the Hughes Brothers Christmas Show, Branson’s longest running totally Christmas show.

“Branson-Up Close and Personal,” is a service of the Branson Tourism Center (BTC) and is intended to provide readers with an unprecedented look at a Branson celebrity or personality. The interview with Lena Hughes (LM) was conducted on July 28, 2016 for BTC by Gary J. Groman, a 30 year resident of the Branson area, local columnist and freelance writer, and is presented in a Question and Answer format:

BTC: In what town did you live prior to moving to Branson?
LH: Taylorsville, Utah.

BTC: Is that where the Hughes Brothers were born and raised?
LH: Yes.

BTC: Did you perform with what was to become the “Hughes Brothers,” with your husband Gary, when they first started?
LH: Yes, I sang and played the clarinet; Gary played the accordion and sang

BTC: What was the original name of the act?
LH: Oh, it was very original, “The Hughes Family Show.”

BTC: When did you and Gary stop performing?
LH: Around 1979. It then became the “Hughes Brothers Show.”

BTC: What role did you and Gary play with the show immediately after you stopped performing?
LH: That’s when I assumed the role of “M & M,” Mom and Manager and Gary ran the sound.

BTC: What did the Hughes Brothers do between 1983 and 1994?
LH: Traveled around the country performing from our home in Taylorsville.

BTC: So in general terms, the Hughes Brothers have only lived in two places, Taylorville, UT and Branson, MO.
LH: Yes.

BTC: How big a gamble was it for the Hughes family to move to Branson?
LH: It was a big gamble, but the real story lies in all the things that pushed us to Branson.

BTC: What pushed you to Branson?
LH: It was a power bigger than us that we couldn’t fight. Consistently, over the years, as we performed people would tell us about Branson and suggest that it would be a perfect place for us to perform and, from the magazine in the Doctor’s office with the Osmonds in Branson on the front cover, to the man who finally helped us break into Branson, and much more in between, it just seemed like Branson was the place where we were supposed to be. After much prayer and getting a short contract with Silver Dollar City, the whole family moved to Branson in 1995.

BTC: What did the gamble involve?
LH: Selling our home and business and uprooting our entire family. Up to that time, the Hughes Brothers was not our only source of income because we had other income coming in from our business, but that all changed when we moved to Branson.

BTC: What’s your fondest memory of the time you spent in Taylorsville?
LH: I have two; working in my garden without any rocks in it and just watching the boys develop their talents.

BTC: What did you do between Silver Dollar City and the time you purchased the “Roy Clark Celebrity Theatre?”
LH: Persisted and, in faith, walked through every door that opened, as we developed our own show and were ready when the door opened and presented us with the opportunity to buy our own theatre.

BTC: When and what was that?
LH: In January of 2000 when Jim Thomas offered us the opportunity to buy the “Roy Clark Celebrity Theatre.”

BTC: Was it smooth sailing after that?
LH: Well the opportunity was a blessing, but it involved a miracle to fully bring it to fruition on the very last day, almost five years later.

BTC: Did you and Gary decide to add to the family after the boys had grown up?
LH: Yes, we adopted four, two sisters and a brother and sister from Russia in 2003. They were between the ages of 9 and 13.

BTC: When did the Hughes Brothers start incorporating other family members into the act?
LH: Over 20 years ago, when Kristina was about a year and half old and started coming up on stage and performing while we were at Silver Dollar City. Obviously, it has steadily evolved since then, to the point of where we are today. 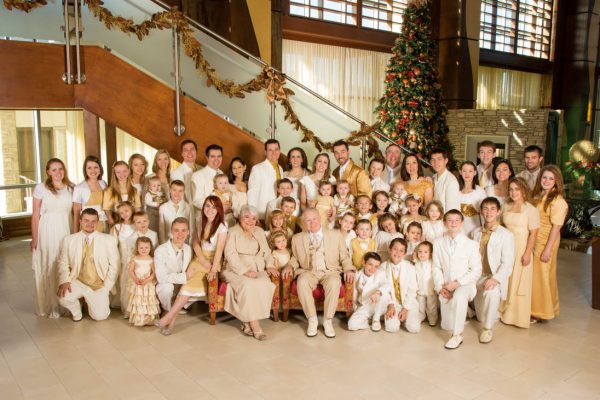 Lena and her late husband Gary, surrounded by the Hughes family in this 2013 Christmas photo.

BTC: What do you feel when you see your sons performing on stage with their wives and your grandchildren?
LH: I’m so inspired and think to myself, “This is why we do this.”

BTC: What’s your favorite part about this year’s it starring the Hughes Brothers?
LH: I really like the last number where about 20 of the children, ranging in age from 9 to 16, sing Children Will Listen. It’s beautifully arranged and performed and has such an inspirational message.

BTC: If a mother called you up and said, “Why should I bring my family to your show?” what would your response be?
LH: Families just love our show because its great entertainment that connects to all ages throughout the whole show, while reminding them so much of their own family, as they sense how much our family loves each other and being together.

BTC: Is there something special and unique about the living Nativity in the Hughes Brothers Christmas show?
LH: Yes, we are the only show in Branson, if not the whole world, that’s been able to produce a live “Baby Jesus,” from within the family, for the past 20 years.

BTC: What’s your fondest memory of the 21 years you have spent in Branson?
LH: My fondest memory is the day we took over total ownership of this theatre on October 4, 2004.

BTC: What one word best describes how you feel about being the “Mom,” “Mother-in-Law,” and “Grandmother” of the Hughes Brothers and their families?
LH: It has to be two words, “Blessed” and “Proud.” “Blessed” speaks for itself, but what I am “Proud” of is simply that they are just such good people.