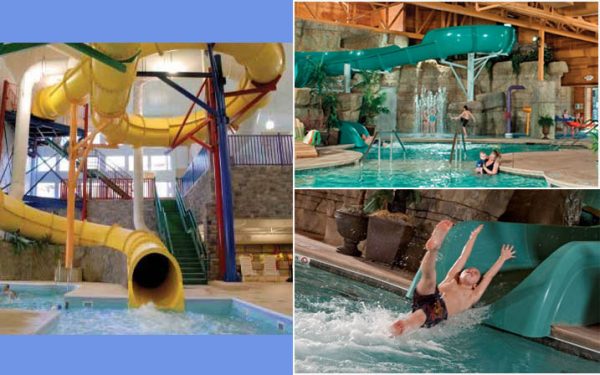 “Winter weather curtails most outdoor swimming and aquatic activities,” said Annette Wood, Director of Sales and Marketing for the Branson Tourism Center (BTC). “However, Branson is blessed with not one, but three indoor water parks as well as many hotels that have heated indoor pools providing Branson visitors with a wide variety of choices to enjoy swimming and aquatic fun under ideal climate controlled conditions,” she added.

All three of the indoor water parks are directly associated with lodging facilities and offer the opportunity to enjoy swimming and other aquatic fun regardless of the temperature or weather outside. Here’s a brief description of each:

Welk Resort’s “Splash-A-Torium” is 10,000 square feet of indoor/outdoor water fun featuring “an outrageous 100 foot” plus indoor water slide, kid’s splash-zone, indoor/outdoor pool, and hot tub.” BTC’s Wood points out that the Resort has recently been redecorated and updated with deluxe and premier traditional rooms that include plush amenities, high-end finishes, and a decor reflecting the unique charm of the Ozarks with its vibrant colors and interesting textures. In room amenities include complimentary WiFi, 32-inch LCD widescreen televisions, coffee makers with high quality coffees and teas, high speed wireless internet and many other exceptional features.

The Resort even has its own theatre! The Welk Resort Theatre is not only home to one of Branson’s most popular new shows, Million Dollar Quartet, but features limited engagement performances by stars such Daniel O’Donnell, Kris Kristofferson and others throughout the year.

Grand Country Inn, has Missouri’s first indoor water park, “Splash Country Indoors.” Open 365 days a year, it offers 20,000 square feet “of squirting, falling and tumbling water fun, including a three-level treehouse with interactive water play features on each level, two winding tube tunnels, a 1,000 gallon tipping bucket which tips every eight minutes, doing you know what to all those below, and much more. The Grand Country Complex, includes the Inn; Grand Country Buffett; The Grand Country Music Hall, home of the Grand Jubilee, Amazing Pets, Comedy Jamboree, Down Home Country, and other great shows; indoor and outdoor mini golf courses, and the Fun Spot Arcade.

These are the indoor water parks in Branson, but many Branson Hotels and Lodging facilities such as the Barrington Hotel & Suites, Grand Plaza, Honeysuckle Inn and Conference Center, Quality Inn Branson, Quality Inn on the Strip, Radisson Hotel, Residence Inn Marriott, and others have heated indoor pools. In addition, the hotels listed above are participants in Branson Tourism Center’s (BTC) Lowest Rate Lock Guarantee Program.

Book your reservation through BTC, and subject to the programs minimal conditions, the price you pay for your lodging is guaranteed to be the lowest rate available. If you find a lower price offered for the same room on the same dates, anytime between when you book your room and when you arrive in Branson, BTC will match the lower rate.

BTC’s Wood also points out that during the winter months, especially on the weekends, the demand for rooms at these facilities often outstrips availability. She recommends advance reservations and offers the assistance of one of BTC’s locally based Travel Planners to assist in helping to find the ideal facility to fit your family’s wants and budget and make reservations. There is no charge for this service and they may be reached by calling 1-800-785-1550. 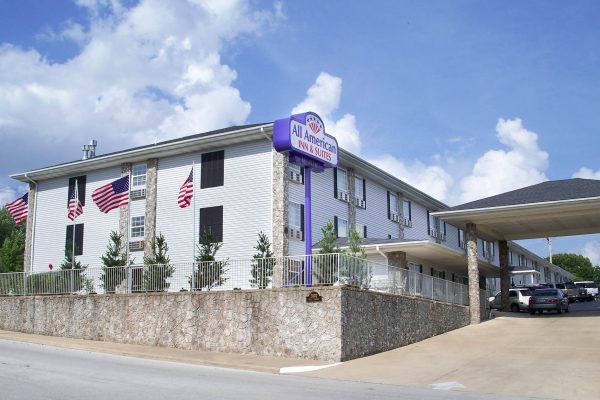 “Why should a family coming to Branson select the All American Inn and Suites (AAI) for their lodging?” Denny Singh, the new owner and general manager said, “The dedication of our family, my wife Mona, myself, and our staff, to ensuring that you, and your family, have a great lodging experience, from ‘check in’ to ‘check out,’ in some of the cleanest rooms, and with the friendliest most customer oriented staff, in Branson.”

All American Inn and Suites is a cozy 81 room property offering a variety of rooms and configurations to accommodate almost every lodging need. The majority of its clean spacious rooms are Double Queen and King, but it also offers Jacuzzi and family suites along with a number of connecting rooms. This provides AAI with the flexibility to meet the lodging needs of the individual traveler as well as families, and groups. Singh points out that while all the rooms at AAI are spacious, the Family Suites are ideal for the families on vacation because they have two rooms that can be closed off from each other.

Each room includes a full complement of amenities. Among others, these include coffee maker with complimentary coffee and tea, desk with ergonomic chair, hair dryer, free Wi-Fi-Internet, microwave, refrigerator, and 32” LCD HD television with cable and local channels, iron, ironing board, and more. 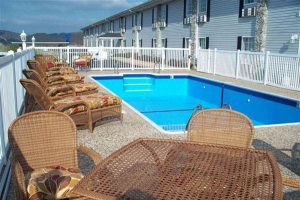 AAI is open year-round and is smoke and pet free with interior corridors and access to all rooms. It has an outdoor pool, elevator, Wi-Fi access in all common areas, free level parking, a laundry that is free to guests, as well as 24-hour coffee in the lobby, and offers in-house ticketing at the front desk, to Branson shows and attractions, providing the ultimate in convenience and ensuring their guests the best available seats to the shows they want to see.

Singh said that one of the features their guests like is the Inn’s location. It’s centrally located to all the fun and excitement that Branson offers, but is away from the noise and bustle, providing an opportunity for peace and relaxation. Yet, when guests are ready for the fun and excitement of Branson, AAI is minutes away from the center of the Branson Strip, the Titanic Museum Attraction, and alternate routes to Silver Dollar City, Table Rock Lake, many of Branson’s shows, attractions, shopping, including Branson Landing, and other activities.

“In terms of all round value, cleanliness, location and customer satisfaction, the All American Inn and Suites has been a perennial hit with our customers,” said Preston Garrison, Director of Operations for the Branson Tourism Center, one of Branson’s largest providers of tourism services and information. He points out that AAI is a participant in the Branson Tourism Center’s (BTC) Lowest Rate Lock Guarantee Program. If you book your stay at AAI through BTC, subject to the programs minimal conditions, the price you pay is guaranteed to be the lowest rate available. If you find a lower price offered for the same room on the same dates anytime between when you book your room and when you arrive in Branson, BTC will match the lower rate.

For additional information or reservations for the All American Inn and Suites, or for any of Branson’s other shows, attractions and activities please contact the Branson Tourism Center (BTC), one of Branson’s largest and most respected vacation planning services. BTC can be reached by either calling their toll free number 1-800-785-1550 or through their website www.BransonTourismCenter.com. 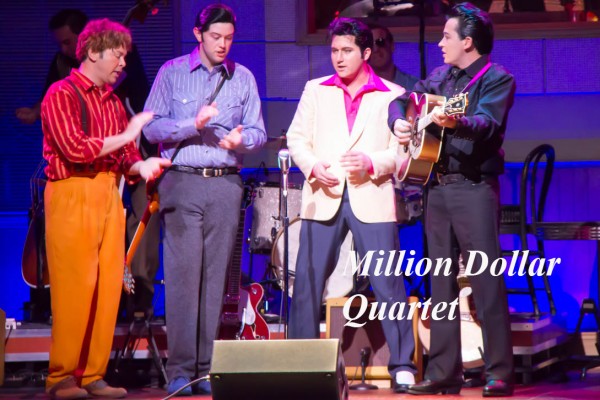 “2016 is going to be a busy and exciting one for the Welk Resort Theatre,” said Susan Smith, Senior Director of Sales and Marketing for Welk Resorts in Branson. “From the Million Dollar Quartet and Charles Esten, to Daniel O’Donnell and Herman’s Hermits Starring Peter Noone, & B.J. Thomas, and more, the theatre will be alive with a vibrancy, variety, and quality of entertainment that will thrill our audiences all season long,” she added. An overview of the show and acts scheduled to appear at the Welk Resort Theatre during 2016 testify to that fact, and provide a glimpse of the fun and dynamic musical entertainment that awaits Branson show goers  at the theatre:

This year will be the celebration of the 60th Anniversary of one of the greatest jam sessions in rock n’ roll history; an impromptu gathering of four young recording legends-to-be, Carl Perkins, Elvis Presley, Johnny Cash, and Jerry Lee Lewis, that took place on December 4, 1956 in the Memphis storefront recording studio of Sun Records. That jam session, unknown recordings of it found decades later, and the four rock n’ roll legends involved became the inspiration for the Tony Award winning musical, Million Dollar Quartet, that shares the music, spontaneity, and drama of what happened that day, as these four legends performed together for their first and last time.

How good is this show? When I first saw the show I wrote, “Over the last three decades, I have seen many Branson shows of all types, but never one like the Million Dollar Quartet! An outstanding cast, timeless music that everyone knows, and a great storyline combine with the show’s unique set and great production to create an incredible entertainment experience for the whole family that should not be missed.” 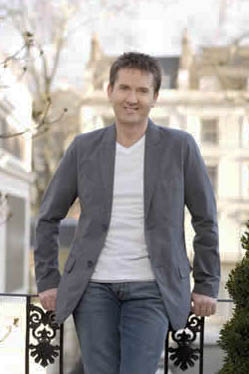 “We feel very honored that, after taking a year off from touring, Daniel O’Donnell picked the Welk Resort Theatre for his Branson performances as he resumes a limited touring schedule,” Smith said. O’Donnell, incorporating his charismatic and engaging style, will present a blend of traditional Irish ballads, country favorites, and traditional gospel with an Irish twist that shows why he has sold millions of records and has been a household name across Ireland and Great Britain for decades. In the United States, O’Donnell has starred in several Public Broadcasting Network Specials as well as charting 18 albums in the Top 20 of Billboard’s World Music Album Chart. In 2011, O’Donnell became the first artist to have an album in the UK charts for 25 consecutive weeks.

Annette Wood, Director of Sales and Marketing for the Branson Tourism Center, points out that, when planning to see any of the shows at the Welk Resort Theatre, it might be a good idea to consider that it is part of Welk Resorts Branson which also contains the Welk Resort Hotel, a full service facility, that is one of the finest lodging properties in Branson. The hotel recently completed a multimillion dollar renovation that included its lobby, common areas, corridors and 159 guest rooms and baths. “We’re very proud to offer our hotel guests an all new guest room that enhances the value of their experience with us,” said Dathan Atchison, General Manager of the Welk Resort. “We have always made gracious service to our guests our foremost objective. Now, along with our other great amenities that Welk guests have come to expect, we are very excited about our new rooms and hotel upgrade, and believe our guests will be also.”

Wood suggests that a Branson experience combining the purchase of show tickets at the theatre and lodging at the hotel into one package could result not only in convenience, but in savings. “What could be better than seeing great entertainment, staying at a wonderful resort, and saving money while doing it,” she said.

For additional information on any of the show at the Welk Resort Theatre, or any of the things there are to do in Branson, she recommends contacting the Branson Tourism Center and talking with one of their Branson-based Travel Planners. They’ll be delighted to assist you! BTC can be reached by calling 1-800-785-1550 from 8:00 AM to 9:30 PM seven days a week, or through its website www.BransonTourismCenter.com.