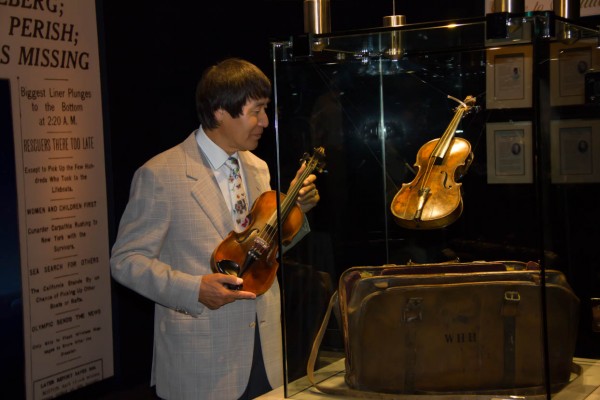 Shoji Tabuchi viewing the Wallace Hartley Titanic Violin and paying his respects to his fellow musicians who perished that night.

Why would someone pay $1.7 million for a violin that can’t be played and has not played a note in over 100 years? There can’t be too many reasons, but one would surely be because it’s believed to be the very violin played by the Titanic’s bandleader, Wallace Hartley, the night of April 14, 1912 when the RMS Titanic hit an iceberg and sank into the deep depths of the icy north Atlantic, and became a legend for the ages.

“RMS Titanic bandleader Wallace Hartley’s violin has become the iconic symbol of the Titanic saga. Found strapped to his body after the sinking, it was returned to his wife-to-be, only to be lost to the world until it resurfaced almost a century later. Now, for the first time since an unnamed owner took possession of the violin, visitors to the Titanic Museum Attractions will be able to experience, for themselves, the overwhelming sense of emotion it evokes,” says Mary Kellogg-Joslyn, co-owner of the Titanic Attractions.

She also points out that 2016 is the 10th anniversary of the Titanic Museum Attraction’s “setting anchor” in Branson, and to honor the occasion, they are pleased to present a 2016 World Exclusive Exhibit, the display of the $1.7 million Wallace Hartley Titanic Violin; it will be at the museum from March 7 through May 29 along with the only Bible to survive the sinking.# “The Titanic Violin may never be played again,” admits Kellogg. “But one of the final songs Wallace Hartley was said to have been playing during the ship’s final moments can still be heard in our imaginations: ‘Nearer, my God to thee, Nearer to thee…’”

Although the violin exhibit is a major feature of its 10th anniversary celebration, there will be other events at Titanic during the year to honor the occasion. One of these is a special $10.00 admission to the attraction for children ages 5 through 12 throughout all of 2016.

When asked why Branson was picked as the “home port” of the Titanic Museum, Kellogg pointed out that it was a process that started over a decade before its 2006 opening. More than 10 years before that, while serving as the Executive Vice President of Television for The Walt Disney Company, she bought the national TV show “Live With Regis and Kathie Lee,” to the Grand Palace in Branson as the result of a letter received from Steve Presley, on behalf of the Ozark Marketing Council. During the process, a warm friendship with the Presleys developed and Mary and her husband John fell in love with Table Rock Lake. As a result, they kept in contact with the Presleys and came back to Branson and Table Rock Lake every 4th of July.

Through the years, her husband John, who had been touring with the Titanic artifacts throughout Europe and the United States, thought that they needed a permanent location for display. When he decided it was time, their love of Branson and friendship with the Presleys, along with the demographics of the Branson visitor, made Branson an ideal location. The museum opened in 2006 and the rest is history.

“Congratulations to the Titanic Museum Attraction on the occasion of its 10th anniversary in Branson, and on being able to obtain a 2016 World Exclusive Exhibit, the display of the $1.7 million Wallace Hartley Titanic Violin,” said Annette Wood, Director of Sales and Marketing for the Branson Tourism Center. “What a blessing the Titanic Museum Attraction has been for Branson and its visitor as it honors those who were on board by telling their stories in a special and dignified way, while providing Branson visitors of all ages with a special, unique, and fun-filled experience they’ll never forget,” she added.

For additional information or tickets for the Titanic Museum Attraction, or any of Branson’s other shows and attractions, or for lodging arrangements, please feel free to contact the Branson Tourism Center, one of Branson’s largest and most respected vacation planning services; call 1-800-785-1550 or visit www.BransonTourismCenter.com.

# From June 7 through Labor Day Weekend the violin will be on display at the Titanic’s sister ship in Pigeon Forge, TN