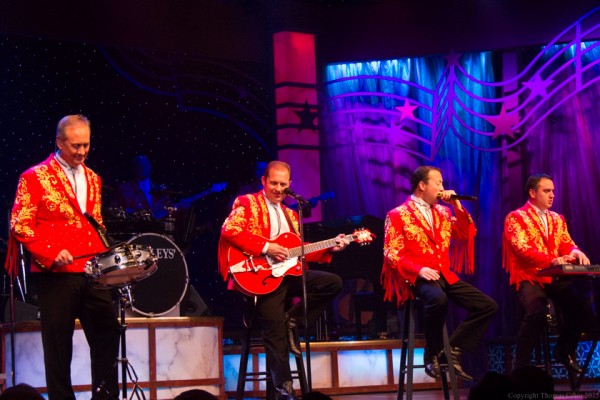 When the Presleys opened the first theatre, on what is now the famed Branson Strip, in 1967, they had no idea of the iconic status they would achieve or the millions of people they would entertain and whose lives they would influence. What they did have was a dream and, most important of all, the “togetherness” to achieve, sustain, and evolve that dream while keeping it relevant to the changing times and audiences they have been entertaining over the last five decades.

The following points, taken from recent interviews with Gary and Steve Presley and, with permission, from their book, “The Presley Family Story,” testify to that togetherness and why Presleys’ Country Jubilee has been, is, and will continue to not only be one of Branson’s most popular shows, but epitomize what Branson family entertainment is all about:

Mountain Music Theatre: When the Presleys originally built the first theatre on what has become the famed Branson Strip in 1967, it was built in partnership with the Drennon family and called the Mountain Music Theatre. Within three years of opening the Drennon’s had sold their interest in the theatre to the Presleys and the theatres name began its evolution to its current name Presleys’ Country Jubilee. 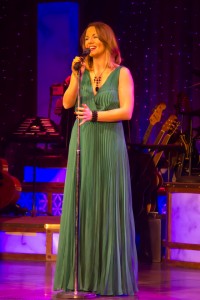 Miss Smith Goes On National TV: When young Ambrus Smith won Ed McMahon’s “Next Biggest Star,” on national TV at age 13 with her performance of Break It To Me Gently, she had been performing, very successfully, in a variety of Branson shows since she was eight. A few years later she started performing for Presleys’ Country Jubilee as a lead vocalist, met John Presley, and the rest is history.

Theatre or Boat Storage: Steve Presley said, “When we built the theatre in 1967, we built it with a flat floor and big double doors in the backside. We didn’t know how the business would do so Dad and Gary had the thought that, ‘Well, if it doesn’t work as a theatre, we can always use it for boat storage.’” Well, it has worked really well as a theatre for almost 50 years now, and as Lloyd Presley once, smilingly said to his sons, “Tell you what…we never had to store any boats in the theatre, did we boys?” In an interview on April 28, 2016, Gary Presley said that although the door is gone, the original opening and door frame is still there.

They Had to Have Real Jobs Too: When the theatre initially opened in 1967, in addition to performing in the show and working in the theatre until late at night, Gary and his mom, Bessie drove to Springfield every day to work at Royal Typewriter, Lloyd was a fishing guide, and Pat worked at Security Bank in Branson. There were some long days put in by those family members performing as well as those working everything from concessions, marketing, costuming, parking, fixing the air conditioning, and whatever else had to be done, but they did it together.

Branson Performance Record: In 1967, when they started performing in the theatre Gary Presley was 20 and Steve was 10. They have been continuously performing in the show since that time and set a new Branson record every night they perform. 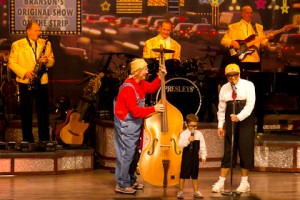 Three generations keeps them laughing: Gary Presley, as Herkimer, has had the joy of working with his son Eric, playing Herkimer’s son Cecil in the show, for many years. In recent years that joy has been compounded as they have been joined for key spot appearances by Eric’s young son Ben, as Cecil Jr.

A Funny Moment Springs Up During Show: One of Gary’s funniest memories involves a spring that runs right under the front stage and the culvert outside where the water goes on down the hill. He said, “Dad and I used to keep our crawdads in that spring. It was so cold so they stayed good and alive. Well, one night during the show there came a huge rain, and that minnow bucket full of crawdads caught in the culvert just perfect and plugged it like a cork. It was more toward the end of the show, when I’m dressed in a nice suit, and all the water started backing up into the theatre. I was out there in that suit, waist-deep, trying to pull that crawdad bucket out of that culvert.”

Togetherness, values, and sincerity are keys to the Presleys’ success: Sure, the great entertainment that Presleys’ Country Jubilee provides is a major part of their success. However, at the end of the day it is the fact that “the audience can feel the fun that the Presley family is having onstage,’ their sincerity, and togetherness that adds to the audience’s experience and makes an evening with the Presleys so special.

Steve Presley said, “We give mom and dad all the credit for that. They raised us with good values and respect for each other, and we’ve tried to pass those same values along to our kids. We’re a family, and an audience can always tell whether you’re sincere or not.” Gary Presley adds, “From the very beginning it has been the whole family working together that built the theatre and made the show what it is today. It’s their combined efforts, contributing the very best they had, wherever and whenever it was needed, that has brought us this far on our wonderful journey together.”