Over the years, different adjectives, such as “incredible” and “amazing” have been used to describe the Acrobats of China Featuring The New Shanghai Circus Branson show. After seeing their 2016 performance yesterday [May 25, 2016] I would have to add one more, “unbelievable,” as one amazing act after another performed incredible acrobatic feats that, in many cases, seemed “magical,” even though I knew it was the skill, endurance, strength, and agility of some amazing performers actually performing what I was seeing.

I have seen this show many times during the 18 years it has been performing in Branson and am so entertained and amazed each time I see it, but one thing has been constant, the bar is raised each year even though the previous year’s show was top notch, and 2016 is no exception. From the use of a rider on a hover board, to changes in costuming, music, and choreography as well as the acts themselves, it was like I was seeing a brand new show and, what a show it was!

Except for intermission, from the time the curtain went up until they took their final bow, there is a fresh constant flow of exciting acts from strength acts, and the juggling of everything from drums, hats, and humans to pole climbing, high-flying Silks, amazing group cycle riding, and much more. Each act is like a separate show, in terms of colorful costuming, set design, lighting, choreography, music, and presentation yet they flow seamlessly from one to the other with no dead time providing about 2 hours of the most amazing, incredible, and unbelievable entertainment in Branson.

I also asked, “Do you think that this show can entertain kids and adults simultaneously?” With a big smile on her face she replied, “Definitely!” Particularly with Branson entering that part of its season where families, with kids of all ages, come for vacation that’s important. In terms of content, all the Branson shows that I have seen over the last 30 years are “kid friendly” but, in terms of things in a show that will hold their interest throughout the majority of the show there are very few. There are fewer yet that can entertain both kids and adults simultaneously throughout the majority of the show. The Acrobats of China Featuring The New Shanghai Circus, is absolutely one of those few shows!

Typically, when I review a show I pick three of my favorite things to emphasize. For this show that would be: 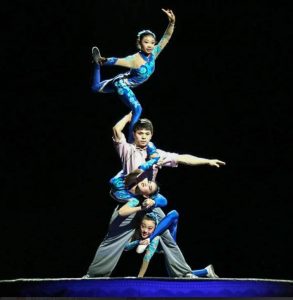 The Human Strength set is a demonstration of strength, beauty, agility, and elegance.

Human Strength: A beautiful, graceful, and elegant demonstration of strength performed by a man and three girls. It was amazing and easily the most enjoyable strength act I have ever seen.

Cycling: It had all the beauty, color, excitement, and daring that I expected, based on what I have seen in the past, and “then some.” It’s almost amazing when one of the riders flips from one moving cycle to the other and how many they fit on one cycle. No, actually, it’s unbelievable, but I saw it with my own eyes!

Rope Skills: It has rope twirling, as you have never seen it before, performed by both individuals and groups as well as a jump rope set, unlike anything I have ever seen. Figuratively speaking, this unique high energy act blew my socks off.

Hoop Diving: Folks this isn’t your grandmother’s hoop diving act. This high energy, high flying act had more action going on than you could shake a stick at. Even though I had seen hoop diving in the show before, this segment was unbelievable as these guys take hoop diving to a new exciting level.

I know there are four, but I couldn’t help myself.

If you are looking for a Branson show filled with high energy, color, daring, and excitement that will entertain kids and adults simultaneously as they sit on the edge of their seat waiting to see what’s coming next, the Acrobats of China Featuring The New Shanghai Circus is your show. For additional information or tickets please contact the Branson Tourism Center, one of Branson’s largest and most respected vacation planning services by calling 1-800-785-1550 or through its website www.BransonTourismCenter.com.