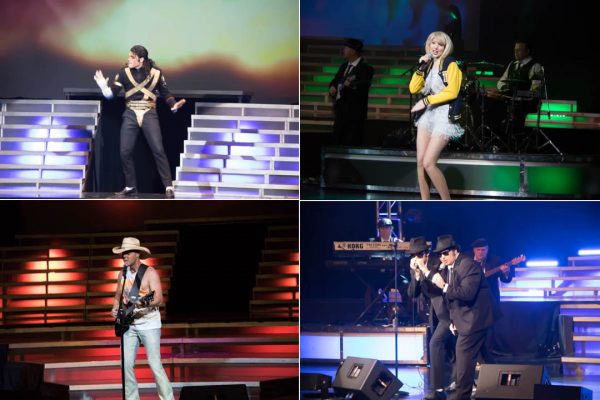 “Well, if it’s the summer of 2016 and Legends in Concert’s celebrating its 20th year in Branson, with a little help, that might just be a possibility,” said Preston Garrison, the Director of Operations for the Branson Tourism Center. As I watched the Legends in Concert (Legends) show last week, I experienced first-hand what Garrison was alluding to and saw, among others, Legends in Concert tribute performances by Taylor Swift, Michael Jackson performing “Thriller,” and Johnny Cash singing “Ring of Fire.”

It is a colossal show, in terms of the number of tribute artists, band members, singers and dancers performing. Legends brings to the Branson stage the same level of production, talent, and excitement that its Las Vegas, “parent” has been providing since 1983 and its “siblings” are providing at such prime destination as Waikiki, Myrtle Beach, Atlantic City, and others.

From the very beginning, the hallmark of Legends in Concert has been the quality of its tribute artists. Each performer “not only looks like the star they portray, but uses their own natural voice to pay homage to their iconic music counterpart.” The six legends portrayed in the show I saw were “Kenny Chesney” performed by Todd Bradshaw, “Taylor Swift,” performed by Elizabeth Scarborough; the “Blues Brothers,” performed by Danny Z and Clint Nievar; “Michael Jackson,” performed by Michael Knight; “Johnny Cash” performed by Paul Eve, and “Elvis Presley,” performed by Travis Powell.

Each does a four or five number “set” amid a production making each, at a minimum, a wonderful distinctive concert, and most, especially Michael Jackson’s set, a mini production, unlike anything else offered in Branson. Although, just about every number in every set could be considered a highlight, I will mention just one from each set:

Kenny Chesney: The ballad “You Had Me From Hello” and how the audience was invited to come to the front of the theatre and dance, becoming part of their own entertainment experience.

Taylor Swift: “Never Ever Getting Back Together,” along with its introduction, was extremely entertaining both musically and in the way it was presented. The costume changes during the set were amazing!

Blues Brothers: “Soulman,” as was the case with every number during their set, was energetically performed with great support from the dancers, and some great moves by “Elwood.” Don’t know how these guys can do it, but they do and the audience loved it.

Michael Jackson: “Thriller,” with Knight’s performance and the special effects, dancers, and Michael’s “moves” was probably my WOW moment in the whole show, and that’s saying a lot because it is one great show and I am not a Michael Jackson fan.

Johnny Cash: Loved his performance of “Ring of Fire” and his introduction to it.

Elvis: “My Way” was beautifully done and has special meaning to me.

Some make the mistake of getting up and leaving after Elvis, but then they miss one of the highlights of the show, the whole cast Finale including “Viva Las Vegas.” It is something you definitely don’t want to miss!

As great as the individual tribute performers are, without great special effects, choreography, and costuming; along with a great band, and dancers and singers talented enough to not only perform different genres of music, but virtually perform six different “mini shows,” for six different stars, within one amazing production, this show would not be the great entertainment experience it is. It is their consistent performance show after show, star after star that, in this writer’s opinion, is the real “legend” behind the Legends in Concert show.

This is a show that totally entertains from start to finish with “legendary” entertainers, wonderful special effects, live music, dancers, and spectacular Las Vegas choreography and production. There’s nothing else like it anywhere else in Branson and is proof positive why Legends in Concert is billed as the “World’s Greatest Live Tribute Show.” For additional information or tickets for Legends in Concert, or any of Branson’s other shows and attractions, or for lodging arrangements, please feel free to contact the Branson Tourism Center, one of Branson’s largest and most respected vacation planning services; call 1-800-785-1550 or visit www.BransonTourismCenter.com