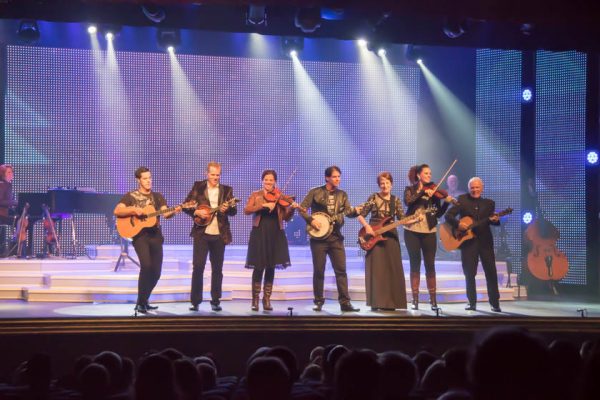 As I watched the Duttons show last week, I was again reminded why they have been so popular for so long and made it to the top ten on the NBC prime time hit show, “America’s Got Talent.” From their opening number, a medley, including the Fall Out Boys hit “Centuries,” “We Will Rock You,” and “Radioactive,” to their famed Finale, “Boil Them Cabbage Down,” it is a wonderful entertainment experience, filled with fun, great music, humor, inspiration, and that special Dutton warmth that simultaneously entertains and inspires the whole family.

The stars of the show, and the center around which it revolves, are the Dutton siblings Timothy, Benjamin, Jonathan, Abigail, and Amy, along with Tim’s wife Judith. Whether its vocal, instrumental, dancing or comedy, their talents alone are remarkable, but when the talents of drummer Rob Wilson, and other members of the Dutton family, are seamlessly integrated into the performance, the result is two hours of outstanding non-stop entertainment that simultaneously entertains adults as well as children. 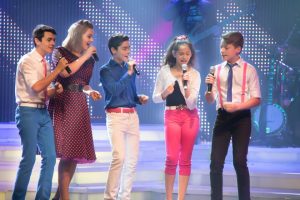 I am not aware of a music show in Branson that is not suitable for children in terms of its content but, based on my personal experience, I can say that, with very few exceptions, such as it Starring the Hughes Brothers, the vast majority of Branson’s music shows have not been designed with a consistent flow of material and performers, strategically placed throughout the show, that will appeal to the children in the audience and hold their interest throughout. The Duttons does that “and then some!”

A perfect example, and one of my favorite numbers in the show, was their performance of “Cotton Eyed Joe.” The combination of their remarkable instrumental skills, with a neat “black light” performance featuring other members of the family, along with a demonstration of Benjamin’s superb dancing skills entertains both adults and children, throughout at the same high level.

From among many here are a few of my favorite highlights. Timothy Dutton demonstrated why he’s considered one of the most accomplished instrumentalists when he played a short segment of “Pachelbel’s Canon in D major” on a variety of instruments, from the violin and guitar to the mandolin and used a “looper” to combine them into “an orchestra.” WOW, was it ever something to see and hear; it was unbelievable. It’s hard to imagine a more entertaining, dramatic, or energetic performance of “The Orange Blossom Special” or “The Devil Went Down to Georgia” than the “Duttonized” version of these classics.

Amy’s performance of Vivaldi’s “Four Seasons Summer Movement;” Tim and Judith’s duet of “You Say It Best When You Say Nothing At All,” accented with the dancing of Shelia and Dean was as beautifully performed as it was touching; one of the most personal and sincere Veteran’s segments of any show in Branson; and their spectacular “patented” finale of “Boil Them Cabbage Down” were also favorites. “You Can Count On Me,” an inspiring and beautifully performed all family number, touched my heart because, to me, it captures what makes the Duttons so special; their commitment to each other, their craft, and entertaining their audience. 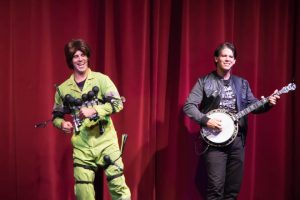 Ok, I just have to mention cousin Julio, who, along with his straight man Jonathan, adds a large dose of humor to the show as he tries to “horn” in. It’s not only funny, but you won’t believe what he can do with those horns.

Some of you are probably asking, “Is there nothing in this show that you didn’t like?” The simple answer is, “Not much, not much at all.”

Previously I wrote, “From rock and roll to blue grass and country this show has a variety of music with something for everyone. It’s not the shows content alone however, that makes it so special. It’s how the Duttons present it! It’s that fabulous Dutton talent, instrumentality, flair, showmanship and their innate ability to instill that warm directly ‘from our family to you and your family’ feeling into its audience, that makes this show the unique, special and wonderful Branson entertainment experience that it is.” All I can say after seeing their show last week, is, “Ditto.”

For tickets or information for the Duttons show or for any of Branson’s other shows and attractions or for lodging arrangements please feel free to contact the Branson Tourism Center, one of Branson’s largest and most respected vacation planning services by calling 1-800-785-1550 or through its website, www.BransonTourismCenter.com.