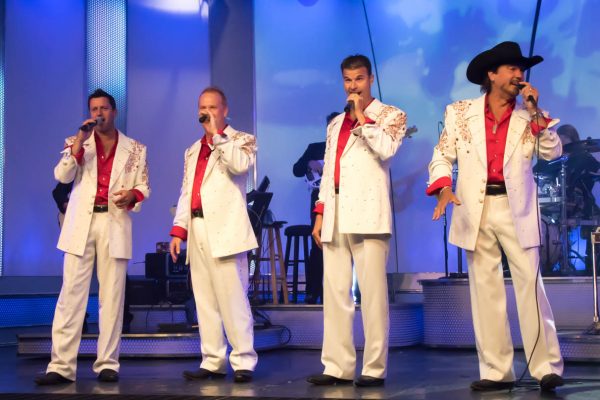 The Pierce Arrow Show is perennially one of Branson’s most popular shows. The success of the show is directly attributable to the man who started the show, Dan Britton, who is also the show’s executive director and the bass singer in its award winning quartet, “Pierce Arrow;” the outrageously funny James Sibley; female vocalist Shonna Bond, and the Pierce Arrow Band. It’s two hours of wonderful vocals, humor, inspiration, and fun.

“Branson – Up Close and Personal,” is a service of the Branson Tourism Center, one of Branson’s largest and most respected vacation planning services, and is intended to provide readers with an up close and personal look at a Branson star or personality. The interview with Dan Britton (DB) uses a “Question and Answer” format with the interviewing being done for the Branson Tourism Center (BTC) by Gary J. Groman, a 30-year resident of the Branson area, local columnist and freelance writer.

BTC: You had stopped performing a few years back, but are back performing now. Why?
DB: I had been entertaining all of my life and, at the time, I was looking for a break. When Tim Storms, the guy who replaced me in the Guinness Book of World Records as the world’s lowest bass singer, came to work for me, it was a Godsend. A couple of years ago he decided to pursue some other career interests and left the show, so here I am again.

BTC: How do you feel about being back on the stage performing?
DB: I’m enjoying singing more than I ever have in my life.

BTC: What is your personal favorite part of the Christmas Show?
DB: Our finale, “Oh Holy Night,” performed by the full cast. The spiritual aspect of what I do is very important to me and there’s just not a better song out there that expresses the true spirit of Christmas.

BTC: It is said that you set the world record for “the lowest note ever sung” and that your vocal accomplishments have been recorded in the “Guinness Book of World Records” several times. Of all the vocal records you have set, which one means the most to you and why?
DB: Setting the Guinness Book of World Records record for the lowest note produced by a human voice which I held for 18 years. When I won it I replaced J.D. Sumner, one of my idols. I was replaced on the list by Tim Storms, who sang bass in our show up until about two years ago when he left to pursue other interests.

BTC: How did you end up in Branson?
DB: My brothers and I performed together traveling around doing night clubs for ten years. I had decided that I was going to quit because of the traveling and other factors. I got a call from a group here in Branson called the “Branson Brothers” who said I would not have to travel if I came to Branson and sang with them. I started with them while they were performing at Silver Dollar City.

BTC: How long have you been Performing in Branson?
BD: Since about 1991. I performed with the Branson Brothers at Silver Dollar City for about five years before going to the ’76 Music Hall [Now Grand Country] with Pierce Arrow.

BTC: How long has Pierce Arrow been in this theater.
DB: In 2000, along with some investors, I bought this theatre. Leaving the job I had was one of the hardest decisions of my career, but I felt a calling to do it. Our first show in this theatre was on May 22, 2000.

BTC: Do you own the theatre?
DB: Yes, I am the majority owner with my two brothers.

BTC: What do you do in your roll as Executive Producer of the show.
DB: I am involved with every aspect of the theatre and show, from production, lighting, wardrobe, choreography, show content, hiring and firing etc. and whatever else it takes. On occasion, I have gone from singing to cleaning the theatre.

BTC: What is your first memory of Branson?
DB: How quaint it was and the overwhelming friendliness of the people.

BTC: What do you like best about performing in Branson?
DB: The opportunity to perform such a wide variety of music and the wholesomeness of Branson.

BTC: What’s your favorite thing to do in Branson when you are not performing?
DB: Being at home with my family and our horses.

BTC: Where is your favorite place to eat in Branson – Favorite dish?
DB: Paradise Grill right across the street from our theatre. I just love their steaks.

BTC: If you could perform or meet with any entertainer/person (living or deceased) who would it be and why?
DB: Trace Adkins, a country singer, because of his music.

BTC: In all the performances of Pierce Arrow that you have been involved with, either as a performer or an executive producer, which one personally meant the most to you?
DB: Performing for President George W. Bush in Joplin, Mo.

BTC:  Do you have a favorite hobby or activity and what is it?
DB: Raising horses.

BTC: Do you have a “little known” fact about yourself that you think our readers would enjoy?|
DB: I am known for making the best homemade biscuits and gravy in Branson. Just ask my kids and their friends.

BTC: What is the funniest thing that has happened to you in front of an audience?
DB: The night when I was rushing to get into position to go out on stage, but tripped and went flying out through the curtains across the stage, skipping like a rock in a pond.

BTC: What part the show do you enjoy performing the most, and why?
DB: The patriotic finale because it thanks the Veterans, the members of the military and their families for their service and sacrifices and moves so many people.

BTC: If I were planning a trip to Branson why should I plan to see your show?
DB: Because you’re on vacation and you will feel like you’re at a party. When you leave you feel happy and entertained.

BTC: If I were coming with children ages 9 through 14 would your answer be the same and why?
DB: Yes. Our show is very visual. Kids love our active comedy, music choices and things like our moving stage.

BTC: Anything else you want our readers to know?
DB: Often people come up and say, “Dan, you sure are lucky.” I reply, “No, but I sure am blessed.” God has blessed me with a wonderful family, opportunities and the community of Branson in which I work, live and raise my family and for that I am very thankful.

For more information on the Pierce Arrow show or any of Branson’s other shows and attractions, or for lodging arrangements, please contact the Branson Tourism Center, one of Branson’s largest and most respected vacation planning services by visiting www.BransonTourismCenter.com, or calling one of their Branson-based Travel Planners at 1-800-785-1550. They will be delighted to answer questions about all that Branson has to offer as well as assist you in getting the best available seating at shows, lodging, and explain how packaging your theatre and lodging together can save you money.