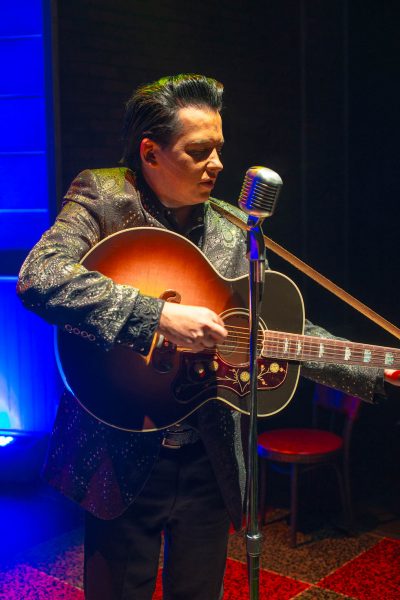 One of Branson’s most popular new shows is the Million Dollar Quartet. It tells the story of one of the greatest jam sessions in rock n’ roll history; an impromptu gathering of four young recording legends-to-be, Carl Perkins, Elvis Presley, Johnny Cash, and Jerry Lee Lewis, that took place on December 4, 1956 in the Memphis storefront recording studio of Sun Records. The jam session went largely unnoticed until recordings of the event were discovered and released decades later. It is that jam session, those recordings, and the four rock n’ roll legends involved that became the inspiration for the Tony Award winning musical Million Dollar Quartet that shares the music, spontaneity, and drama of what happened that day, as these four legends performed together for their first and last time.

Recently, Cliff Wright, who is the tribute artist playing Johnny Cash (CW) in the Branson production of the show was kind enough to take time from his busy schedule to sit down and chat with me on behalf of the Branson Tourism Center (BTC).

BTC: Where were you born?
CW: In Dallas, Texas at Parkland Hospital.

BTC: When did you first become interested in music?
CW: At a very early age.

BTC: In terms of your career what came first, Elvis or Johnny Cash?
CW: It was definitely Elvis Presley, but it took decades to develop!

BTC: When did you first become interested in Elvis Presley?
CW: I was about 9 or 10 years old and was traveling with my family near Memphis, TN. I was playing in the back seat and I heard this song, it was probably “Hound Dog” or something like that. I asked my dad, “Who’s that?” He explained that it was a singer who used to live here. I asked, “Doesn’t he live here anymore” and dad said, “He’s passed on.” A few minutes later we went by a black sign with “Elvis” all over it in pink letters, and my dad pointed out that was the singer we had been talking about. I thought to myself, “Aah!” When we got home I started gathering pictures and info on him. I noticed he wore jump suits so I made one out of a large brown paper sack and even drew eagles and stars on it.

BTC: How old were you when you started performing Elvis professionally?
CW: About 30 or 31.

BTC: That’s quite a gap. What did you do in the interim?
CW: I played lead guitar and actually studied and practiced Elvis and Johnny Cash for hours.

BTC: When did you first start performing professionally?
CW: I have been performing as a lead guitarist since I was 18.

BTC: What caused you to transition from Elvis to Johnny Cash?
CW: Two things, Johnny Cash came easy to me and I wanted to be in a field where there was less competition.

BTC: September 12, was the 13th anniversary of the death of Johnny Cash. Does that date hold any special significance for you?
CW: I was at home rehearsing for a guitar gig when it was announced on TV. I wasn’t doing either Elvis or Johnny at the time. I remember getting my guitar and just playing “Folsom Prison Blues,” and saying the words, not singing them, just saying them.

BTC: If you could influence someone to remember one thing about Johnny Cash or his music, what would it be?
CW: Be as true to what you do as he was to what he did.

BTC: Was your first performance as a Johnny Cash Tribute artist professional or otherwise?
CW: In Omaha, Nebraska in 2011. I was getting into Johnny Cash and did a Christmas show that was half Elvis and half Johnny Cash. When I came out and did Johnny Cash they said, “Forget Elvis, just do Johnny Cash.”

BTC: Branson aside, when did you first hear about the Million Dollar Quartet?
CW: I heard about it when it first came out, but auditioned for the show in Chicago twice before I heard about the Branson production. I auditioned via a You-Tube Link and got the job.

BTC: What was it about the Million Dollar Quartet that made you want the role?
CW: I’m kind of an historian and a huge Sun Record fan. I can tell you stories, about not only Elvis, Carl Perkins, Johnny Cash, and Jerry Lee Lewis, but the guys who recorded at Sun before they came.

BTC: What do you like most about performing Johnny Cash in the Million Dollar Quartet?
CW: Two things, I get to play my hero every night and seeing the audiences reaction to these songs. It’s the coolest feeling in the world.

BTC: What were you doing prior to accepting the role in the MDQ?
CW: Among other things, running a recording studio using the same type and models of equipment that Sam Perkins used at Sun Studios. I still have it in my home and love doing it.

BTC: Why do you think that someone coming to Branson should come and see the Million Dollar Quartet?
CW: They will experience, and feel like a part of, the fun and excitement of the most unique rock and roll jam session of all time, presented by an extremely talented cast dedicated to sharing that magic musical event with its audience. It is a joy to sense and feel the audience’s reaction and response each performance.

BTC: What is your first impression of Branson?
CW: WOW, there’s really a lot to do here!

BTC: What’s your favorite thing to do in Branson when you are not performing?
CW: Just relax. Our schedule is so busy that you really do appreciate your time off.

BTC: If you could meet and perform with anyone, living or dead, who would it be and why?
CW: It would be Elvis Presley because he was the first influence that started on the path that has led me to where I am now.

BTC: Is there one event that you particularly would have like to perform with him at?
CW: Yes, December 4th, 1956 when he performed with Johnny Cash, Jerry Lee Lewis, and Carl Perkins because I would have gotten to see and perform with all of them.