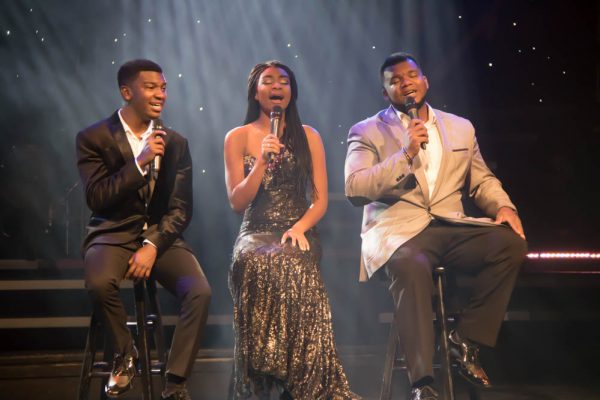 The “Voices of Glory”, the stars of “Ayo,” Avery, right, Nadia, and Michael.

In 2009 America got their first taste of the talented Cole siblings, Michael, Avery, and Nadia, when they competed on the hit NBC prime time show “America’s Got Talent” (AGT)” as the “Voices of Glory.” Their musical talent and inspiring story took them to a fifth place finish in the Finals. Since AGT, the Voices of Glory have been traveling the world perfecting their already considerable skills, and have opened their own show, Ayo starring Voices of Glory, in Branson.

As I watched Ayo recently, I was reminded of their AGT appearance, feeling both the talent and the intensity of the story that inspired the start of their musical career. They came together and sang in the hospital to entertain their mother who was in a coma as the results of a horrible automobile accident. They sang, day after day, for 8 months until their mother came out of the coma, and have been entertaining and inspiring others, and her, ever since.

They still have that special talent and charisma that captured America’s heart when they performed on AGT, but now, it has matured and aged, like a fine wine, and is even more of a joy to see, hear, and experience. I expected great vocals and got them, but there was much more. Not only did they interact and relate to the audience, making them a part of their own entertainment experience, but I was as amazed, as I was entertained, at the choreography that has been worked into most of the numbers.

They don’t just sing; they perform each number. Whether it’s subtle hand, other body movements, or dance steps as they sing, it was a pleasure to see. Now some are probably asking, “Don’t all performers do that?” I imagine so, but this is the first time that I noticed it enough where it added something to my enjoyment of the performance. This is no staid, stand at the microphone concert! Although, present to one degree or another in just about every number, a perfect illustration of what I am referring to would be, one of my favorite numbers in the show, their performance of As Long As I’ve Got King JESUS.

While talking about dancing, I just have to mention one, “surprise,” change of pace, number, I Won’t Dance. It’s a delightful dance number with all of them dancing featuring some nifty moves by Avery and a wonderful tap segment. The audience, including this writer, really loved it! 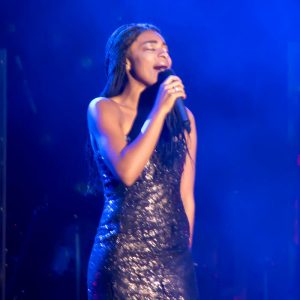 Nadia Cole performing the Whitney Houston classic, “I Will Always Love You.”

Both as a group and individually, they perform a broad variety of music including pop, jazz, gospel, and more. My four WOW musical moments, from among many, would be all three singing, Ain’t No Mountain High Enough; Nadia’s performance of I will Always Love You; Holy, Holy, Holy starting with an old video of them singing it when they first started, that fades into them singing a beautiful a capella version live; and Michael’s performance of My Funny Valentine with a trumpet feature by Ray Harris. Their original song, about the miracle involved with their mother’s survival of her accident, You Sent A Miracle, was as inspirational as it was beautifully performed.

Ayo’s band is composed of some of Branson’s finest musicians, Tim Pope, drums; Marty Wilhite, bass; Barry Bales, guitar; and band leader, Ray Harris, keyboards and trumpet. Not only do they do a great job on a variety of music, but, as noted above, they are “featured” during a number of the vocals adding another wonderful element to an already great show.

Ayo’s Christmas show starts with their first show in November. Nadia said that they are really excited about it because it will contain the very best from their current show during the first half. The entire second half of the show will be devoted to Christmas. When asked what her favorite part of the Christmas show was, without hesitation she said, “I love when we sing ‘Oh Holy Night,’ it’s one of my favorite Christmas songs.”

The way that the vocal talent and charisma of the Voices of Glory is artfully combined with costuming, choreography, large video screens, lighting, a great band, and other special effects, into a wonderful unique entertainment gem, is truly a “joy” to experience. It’s a show that the whole family can enjoy together from beginning to end.

For additional information on Ayo starring Voices of Glory or for information or tickets for any of Branson’s shows and attractions or lodging arrangements please contact the Branson Tourism Center, one of Branson’s largest and most respected vacation planning services by calling 1-800-785-1550 or through its website, www.BransonTourismCenter.com