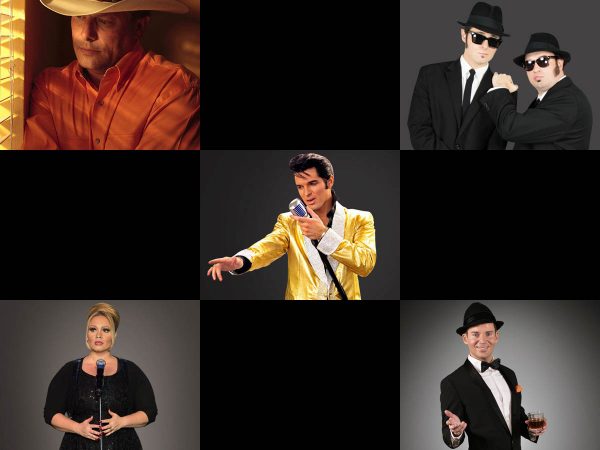 “We are super excited about the line-up for our Christmas show,” said Jeannie Horton, the General Manager for Branson’s Legends in Concert. “We have Tribute Artists honoring the legendary ‘Frank Sinatra,’ performed by Brian Dupre, coming back to our line-up after an eight-year absence; ‘Adele,’ performed by ‘J. C. Brando;’ ‘George Strait,’ performed by Larry Turner; the ‘Blues Brothers’ performed by Clint Nievar and Danny Zeligman; and ‘Elvis Presley,’ performed by Dean Z starting on November 7. Elvis will be performed on November 1 by Cody Ray Slaughter and from November 2 through 6 by Ted Torres,”she added..

When asked what makes the Christmas Show different from the regular Legends in Concert show, Horton started by pointing out what would be the same. Each act will perform a mini-concert containing four or five of the hits of the Legend being portrayed; performed with the sound, mannerisms, expressions, and moves that are about as close to the original as one can get.

Accenting each of those performances, and enhancing the audience’s overall enjoyment is an extraordinary live band, fabulous dancers, and some very talented backup vocalists. When you add elaborate theatrical sets, great choreography, magnificent costumes, and a full array of incredible special effects, including three-dimensional multimedia and multimillion-dollar, state-of-the-art lighting, laser and sound systems, the result is a truly legendary entertainment experience.

She said, “None of that changes for the Christmas show except that, from decorations to the individual performances of the Tribute Artists and the show’s Finale, the special music and spirit of Christmas will be felt.” Horton said that one of the things she particularly likes about the Christmas show is that each of the acts will perform a set featuring four or five of the legendary songs that the artist is noted for, but one of the numbers in each of the sets will be a Christmas song associated with the artist.

She is really excited about the Finale saying, “Our Finale is always spectacular, but this year’s Christmas Finale is just ‘super powerful!’” She said that she did not want to spoil the surprise for the audience, but did point out that all of the Tribute Artists, dancers, vocalists and the band will come together and perform a Christmas Finale unlike any that most have ever seen. In the end however, she could not resist a little teaser as she enthusiastically asked, “Where else in Branson, or anywhere else, can you go to hear a duet of Mary Did You Know performed by ‘Adele’ and ‘Frank Sinatra?’ You definitely don’t want to leave early!”

For additional information or tickets for Legends in Concert please contact the Branson Tourism Center, one of Branson’s largest and most respected vacation planning services, by calling 1-800-785-1550, or by visiting www.BransonTourismCenter.com.