All I can say is WOW! From beginning to end it starring the Hughes Brothers is non-stop quality entertainment from the Hughes family to yours. I’ve seen and enjoyed this show for years, but this year’s show just knocked my socks off! It was like seeing a new show, and what a great show I saw.

The show’s powerful opening set features the stars of the show, the Hughes Brothers, Marty, Jason, Adam, Ryan, and Andy. It sets the stage for what’s to follow. They perform Alabama’s Here We Are; Welcome, from Disney’s “Brother Bear;” and Avicii’s Hey Brother, closing the set out with an absolutely spectacular performance of Pure Imagination from “Willy Wonka & the Chocolate Factory.”

There’s just something about familial harmonies that’s hard to beat and, these guys are just plain good. The opening set immerses the audience in that talent while exposing them to the variety of music they will experience throughout the show. The Brothers perform many numbers throughout the show, with others and by themselves. Two of my favorite pure Brothers’ numbers, from among the many, were Pure Imagination and their a capella version of America.

In addition to singing, the Brothers maintain a constant relaxed interaction with the audience. That interaction, through their comedy and sharing of information about themselves and the family is an inherent part of the show as it transitions from act to act throughout the show.

The Hughes family is billed as one of the, if not the largest family acts performing together anywhere. And it’s quite a cast, including, the four brothers and their wives Marty and Cindy, Jason and Mara, Adam and Vikki, Ryan and Carina, and Andy and Becky, plus over 35 children ranging in age from two to 24.

The number and makeup of the cast is a unique entertainment experience and phenomenon in itself, but it’s so much more! It’s not just putting kids on a stage. These kids are there because they want to be, are talented, and know what they are doing. Jason Hughes, the show’s producer, once said, “Sure it might be a four-year old performing, but it’s going to be one of the best performances by a four-year-old that you have ever seen.”

The kids in the audience seemed excited to see their “peers” performing. This, at the same time their parents and grandparents are enjoying the same performance. From the Hughes Brothers themselves, to their wives, and kids these are very talented entertainers presenting some awesome entertainment.

From among many, here are three of my favorite highlights featuring members of the Hughes family other than the Brothers. The performance of the Halo Theme Song featuring Aaron, William, and Hannah and the barrel drums was a WOW moment. The drums were made from 55 gallon barrels and their combination with the violins and lighting made for an awesome experience. I loved it. It was one of the most unique and amazing violin performances I have ever seen on a Branson stage. 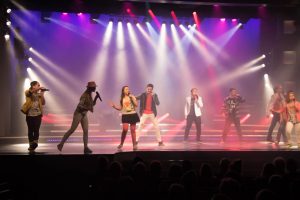 The Teens really knocked it out of the park with their Teen Medley.

The “Teens’ Medley” of I Did It All, Geronimo, and Can’t Hold Us was so much fun! Not only was it colorful and well sung, but the dancing and energy within the performance was phenomenal. The younger Hughes Brothers’ Kids’ performance of the Trunk Song was just a joy. You won’t believe what they do with those trunks, but you will love it!

I could go on and on, but I think you get the idea. This is one great show, with lots of everything for everyone, that families can enjoy simultaneously together. It also is a standalone show that adults will enjoy throughout. It’s hard to explain, but a joy to experience.

Family, yours and theirs, is the whole reason for this show. Nowhere is that more evident than when the Brothers and their wives are joined by the rest of the family as they sing All You Need Is Love and Somebody To Love. “It” would be hard to imagine a more unique, entertaining, or fun filled show for the whole family than it starring the Hughes Brothers.

For more information on it starring the Hughes Brothers please contact the Branson Tourism Center, the sellers of over 5 million Branson show and attraction tickets, by calling 1-800-785-1550 or through their website www.BransonTourismCenter.com