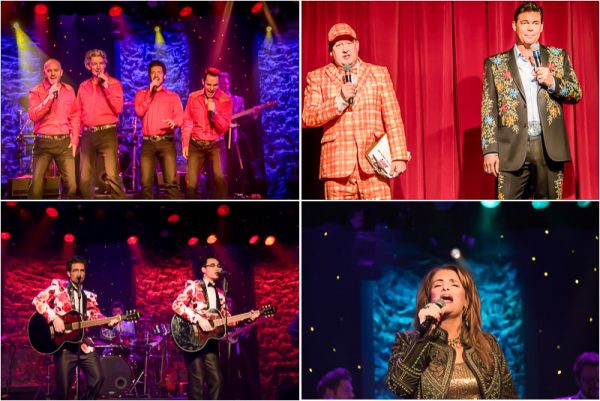 Continuing a 16 year tradition of opening Branson’s new show season, the Grand Jubilee premiered its 2018 show as part of their New Year’s Eve celebration and, except for a short vacation break, is in full swing with their 2018 season. Mike Patrick, the show’s producer and MC said that in developing the show, the challenge is to keep the things that their audiences like and expect and work fresh new elements and numbers into the show.

Having just seen it earlier this month and observed the audiences reaction, it’s obvious that he has done just that. It’s an extremely fast moving show, showcasing great music and hilarious comedy all performed by an award winning cast that just resonates with their audience. The blend of music, colorful costumes, strategically blended in with the hijinks and comedy of “Jim Dandy” and MC Mike Patrick, results in two of the fastest and finest hours of entertainment on any Branson Stage. It is one of those rare Branson shows that simultaneously entertains both adults and children throughout the majority of the show.

New South, Grand Jubilee’s award wining quartet is composed of Lead Vocalist, David Ragan; Tenor, Luke Menard; Baritone Jon Drockelman; and Bass, Mark McCauley. They sing a variety of music from gospel to pop, patriotic, and rock and roll and do it so beautifully. From many, two of my favorite highlights was their medley of Bobbie Sue, All The Gold in California, Tomorrow Never Comes, and Mountain Music. Their unique version of Hallelujah is simply breath taking! Jackie Brown, the shows award winning vocalist shines as she sings a number of songs with my favorite being the Patty Loveless classic, Timber, I’m Falling In Love.

“The Grand Band,” affectionately called “The Rhinestone Mafia,” is blessed with some of the finest musicians in Branson; Michael W. Davis, Piano/Keyboard & Vocals; Wayne Massengale, Fiddle and Acoustic Guitar; Larry Allred, Bass Guitar; Rob Blackburn, Drums; Chad Cathell, Lead Guitar, Acoustic Guitar and Gene Mulvaney, Steel Guitar, Electric Guitar, Banjo and Band Director. Their talent is evident throughout the show as they accompany the vocalists and have solo features with the vocalists. Their talent and “personality” adds a wonderful dimension to the show.

If the music was all there was, that would be enough, but there’s more, the comedy talents of Jamie Haage, as “Jim Dandy.” He, and his straight man “Mike Patrick,” have the audience rolling in laughter throughout the show with their comedy. Just as amazing and entertaining, is the metamorphosis of multi-talented Haage as he surprises the audience with his wide range of musical talents.

There’s just something special about this show! In a previous story I wrote, “From the intimacy of the Grand Country Music Hall, the entire cast coming out during intermission to meet the audience, talk, and sign autographs, and the way the cast relates to the audience during the show, this is a “close up” entertainment experience where it is obvious that both the audience and the entertainers are having fun!” That has not changed one IOTA! This is a unique Branson entertainment experience that should not be missed.

For more information on the Grand Jubilee or other great Branson shows or lodging please contact the Branson Tourism Center, one of Branson’s largest and most respected vacation planning services, and sellers of over 5 million Branson show and attraction tickets by calling 1-800-785-1550 or through their website www.BransonTourismCenter.com.