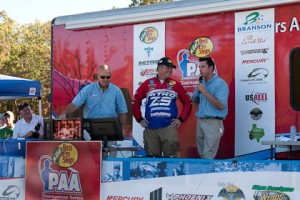 “Wow, what a difference a day makes,” said Levi Kurtright, Director of Marketing for the Branson Tourism Center, a host of the Table Rock Lake PAA Bass Pro Shops Tournament Series presented by Carrot Stix. “We have a new leader who jumped from ninth place on Day 1 to first place on Day 2 and the top three anglers going into Saturdays Final are all from Missouri.”

With the adjustments made based on the number of fishermen competing in the tournament the cut for the Tournament’s Final on October 16 was at 24. The Finalists will fish “Saturday on Table Rock for a total purse of $194,000 including $5,000 to the winner and a new Nitro Z-8 rigged with a Mercury 225 and T-H Marine Atlas Jackplate. Saturday’s launch will be at Table Rock State Park Marina, with the 4:30 p.m. weigh-in to be held at The Fountain at Branson Landing.

Jim Thompson, the owner of the Central Pro-Am Association, a long time leader in conducting regional Bass tournaments and himself a tournament fisherman  said, “The changing weather, clear skies, and the fish in transition should make the Finals interesting. With the caliber of fishermen in the finals and only five pounds separating first from seventh it’s anybody’s tournament to win.”

In his first ever PAA Tournament event, Shane Long, the leader going into today’s Finals indicated just how important every fish is. He said, “I got lucky, got quality bites and put them in the boat. I lost a big one Thursday and I think that may come back to haunt me.”

The Top Ten Finalists, their Home State and the totals they will be starting the Finals with are listed below. Click here for a complete list of the standings at the end of Day 2 including those who are not in the finals.

Branson Tourism Center’s Kurtright encourages everyone to attend the tournament’s Final Weigh-In at the Fountains in Branson Landing at 4:30 p.m. today. He said that that it was an honor for the Branson Tourism Center, one of Branson’s largest and most respected vacation planning services, to host the Table Rock Lake PAA Bass Pro Shops Tournament Series presented by Carrot Stix. Branson Tourism Center can be reached by either calling their toll free number 1-800-785-1550 or through their website www.BransonTourismCenter.com.