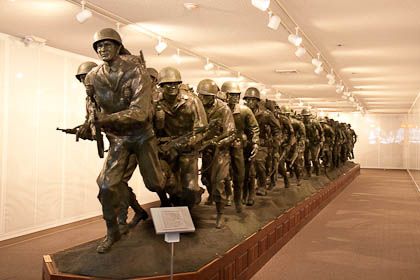 A shared passion, a fathers service, and a son’s love and respect serve as the basis for one of Branson’s most moving attractions, The Branson Veterans Memorial Museum (Museum). June Tillis, the director of the museum said that it was opened in the fall of 2000 by Fred Hoppe, Jr. of Nebraska to honor his father, a World War II Veteran and the Veterans the other wars of the 20th Century, World War I, Korea, Vietnam, and the Persian Gulf.

Tillis explains that the Museum contains over 2000 items, many of them collected by Hoppe and his father, Fred Hoppe, Sr. over a period of 30 years. Hoppe grew up going to military collector’s trade shows with his father, collecting military weapons, memorabilia and other personal items as well as hearing stories of World War II from many of the Veterans he met.

Tillis stresses that the unique personal aspect of the Museum is that it is about the individual soldier and not about the battles, strategy and politics of the war. It  provides Branson visitors with a unique opportunity to see an up close and personal look of a little bit of what those who fought these wars went through on a personal basis through the uniforms, weapons and equipment they used; the letters they wrote; documents and pictures.

Although the Museum has over 2000 items divided into display halls for each of the wars of the 20th Century one of the major features of the Museum is the full sized bronze sculptures by Hoppe who is a noted sculpture of wild life and birds. Two of his sculptures are located outside of the museum, but the highlight has to be the 70 foot long World War II sculpture inside the museum.

The sculpture depicts 50 life sized soldiers storming a beach during World War II. The 50 figures represent all 50 states and has a plaque with the name of the Veteran and the state they represent. Tillis points out that although there were only 48 states during World War II that Hoppe wanted to honor Veterans from all states so he included the 50 figures.

In a tribute to his father, the first figure in the sculpture is his dad, Fred Hoppe, Sr. a decorated World War II Veteran. Hoppe worked ten hours a day to complete the sculpture in ten months so that it would be ready for the opening of the Museum. Tillis says it is her favorite exhibit in the museum because of its detail, scope, and what it represents. “It’s amazing,” she said.

The museum is set up in “rooms,” large exhibition halls, for each war. Each has the uniforms, weapons, and other documents and personal items such as letters, pictures and mementoes telling the personal story of those who fought in those wars. Another unique feature of the museum is that the World War II room has the names of the over 400,000 people who died in that war listed alphabetically on its walls. Particularly moving to this writer was the Flag folded on top of one of the few remaining World War II wooden boxes used to ship the bodies of those who had been killed home.

Tillis said that on average it takes about an hour and a half to go through the museum, but it is not uncommon to have people spend three or four hours going through. She points out that the appeal of the museum to children depends on their age and suggests that children ages six and above will have the best experience. The Branson Veterans Memorial Museum is open every day but Christmas from 9:00 a.m. to 5:00 p.m. during the winter and from 9:00 a.m. to 7:00 p.m. during the peak periods.

Tammy Johnson, the Director of Operations for the Branson Tourism Center said, “The Branson Veterans Memorial Museum is a unique inspiring attraction in terms of its subject matter, scope and emphasis, not only in Branson, but anywhere and Hoppe’s sculptures are just spectacular.” For additional information or tickets for the Museum or any of Branson’s other shows and attractions or for lodging arrangements please contact the Branson Tourism Center (BTC), one of Branson’s largest and most respected vacation planning services. BTC can be reached by either calling their toll free number 1-800-785-1550 or through their website www.BransonTourismCenter.com.