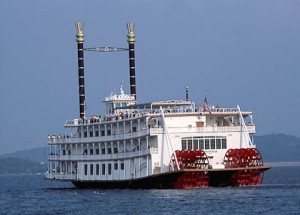 (Branson, Missouri) “The wonder and freshness of Spring is not the only thing causing excitement in Branson, Missouri, the ‘Live music show capital of the world,”‘ said Tammy Johnson, the Director of Operations for the Branson Tourism Center. “When the Showboat Branson Belle starts its 2011 season on March 25. plying the beautiful waters of Table Rock Lake, it will be cruising into the biggest year of change it has had in its 15 years of providing fun, excitement, entertainment, great food and ‘memories worth repeating,'” she continued.

Johnson said that information received from the Showboat indicates there will be two new shows this year along with new costumes, performers, sets, staging, lighting, décor and a new menu. 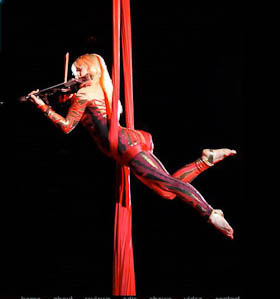 Janice Martin performing the unique aerial silk segment of her headline act while playing beautiful music. It is an amazing thing to see and it's just part of what this amazing performer does.

The show for the evening cruises will be “ENCORE!,” featuring the artistry and talent of Janice Martin, a world class violinist and vocalist as she brings her unique “high-flying theatrics to the Showboat stage.” Martin has performed in concert halls all over the world including Paris, Tokyo and Prague as well as the White House and Carnegie Hall. This writer had the opportunity to see this amazing artist perform during Silver Dollar City’s World-Fest last year and was amazed not only by her musical talents, but beauty, grace and skill involved with her aerial “silk” performance.

Also appearing in ENCORE! will be a new six man vocal and dancing group called “The Showmen” who will entertain Showboat passengers with a powerful blend of harmonies and solo performances. Returning, as the master of ceremonies, is Showboat favorite, magician and comedian, Christopher James and the Showboat’s signature live band “Rockin’ Dockers.” 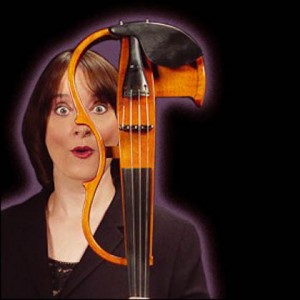 The Showboat Branson Belle’s daytime Comedy Cruises in mid-may will present “Funny Fiddle” featuring Chris Pendleton who is a nationally featured comedian and musician that has appeared on Fox network, Lifetime, Showtime and A& E’s “Evening at the Improv.” Appearing with Pendleton as emcee and fiddler will be Branson favorite and master at the fiddle, Dean Church.

Branson Tourism Center’s Johnson said, “The Showboats new menu sounds scrumptious.” Chef Larry’s succulent entrée offerings include Royal Beef Roast and Chicken Focaccia dressed with Dijon Sauce for lunch and Braised Filet of Beef Tenderloin in a Cabernet Sauce and Mediterranean Chicken Kabobs with a touch of Dijon Sauce for dinner; salads featuring homemade Tomato Basil Croutons; Sweet Potato Mash and French Green Beans and Anna Belle’s Golden Brittle Torte drizzled with Caramel. Johnson also points out that all the meals are prepared in the ships galley and that, in addition to the Showboats regular menu there are specialty dining options available such as the “Paddlewheel Club Room” and “Captains Row.”

For tickets or additional information on the new and exciting things happening on the Showboat Branson Belle or any of Branson’s other shows and attractions or for lodging arrangements please contact the Branson Tourism Center (BTC), one of Branson’s largest and most respected vacation planning services. BTC can be reached by either calling their toll free number 1-800-785-1550 or through their website www.BransonTourismCenter.com.