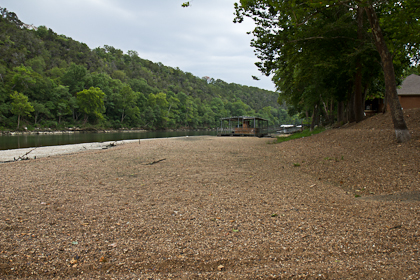 Lake Taneycomo facing downstream from lake bed on July 24 during one of the very infrequent "board" draw downs that brings the lake down to its lowest level.

BRANSON, Mo. Powersite Dam, also known as “Ozark Beach Dam,” near Forsyth, Missouri was completed in 1913. It was the first impoundment of the “White River,” the first hydroelectric dam in Missouri, provided economic stability and income for the developing new town of “Branson” a few miles upstream, and formed Lake Taneycomo.

When they are not generating power or discharging water through the flood gates at Table Rock Dam, 22 miles upstream, the depth of Lake Taneycomo is controlled by the Powersite Dam. In addition to the water it runs through its generators the lakes depth is controlled by wooden “boards” inserted in the top of the dam to raise the water level of the lake. 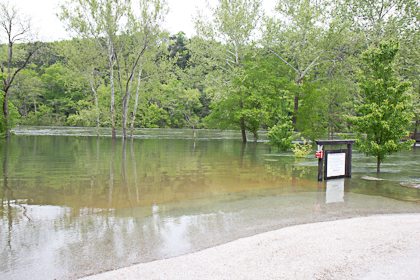 During periods of high water on Table Rock Lake requiring the release of water through flood gates of its dam, the boards either get damaged or have to be removed to minimize the flooding to low lying areas on Lake Taneycomo or its tributaries. When this happens Lake Taneycomo is drawn down to its lowest levels so they can work on or replace the “boards.”

Such a draw down took place over the weekend of July 23 and provided the opportunity to take a picture providing a comparison of Lake Taneycomo at its lowest level and its highest level. Both were taken off the River Point Road launch ramp. The first, upper right,  was taken July 24 from the lake bed, centered on the ramp, about 20 feet from the normal shoreline and is a downstream shot. The second was taken from the entrance to the boat ramp looking down into the lake during the record high water of Easter week.

To put things into perspective, the rushing water near the trees in the second photo is actually at the top of the boat ramp. The spot of the July 24 picture is actually 40 feet farther out into the lake. During the flood the water level would have been at least 12 to 14 feet over the top of my head standing in the spot from which the picture was taken.