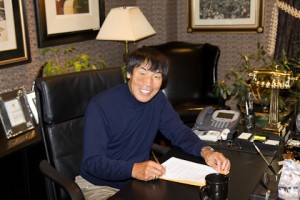 Shoji Tabuchi in his office during a recent interview.

BRANSON, Mo. One of the most popular shows in Branson for over two decades has been the Shoji Tabuchi Show. The great popularity of the show is attributable not only to the amazing talent of its star, but his supporting cast including one of the best bands in Branson and his very talented daughter Christina, great choreography, production, costuming and leading edge special effects.

In describing the Branson’s current show scene and the Tabuchi family’s influence on it, this writer wrote “five words just seem to fit together ‘fiddle,’ ‘production show,’ and ‘Shoji Tabuchi.'” Ever since Shoji started performing in his own theatre 22 years ago, he along with his wife Dorothy, have presented a show that sets the standard for “production” shows in Branson. Shoji said, “My wife Dorothy is the one who has made us the show we are. It is thanks to her vision, planning, and production.”

Shoji when referring to differences between the “violin” and “fiddle” said, “They are both the same instrument, it’s just how you fiddle around with them.” Branson’s most noted fiddle player began playing the violin at a young age when his mother started him playing using the “Suzuki method.” It wasn’t until Roy Acuff came to Japan and did a concert including “Listen to the Mocking Bird,” played on the fiddle, that Shoji decided to change the way he “fiddled” around with the violin and the rest is “History.”

He said, “It was his music and encouragement that inspired me to come to the United States and he was instrumental in having me play on the Grand Ole Opry in 1968. One of the numbers I played was ‘Listen to the Mocking Bird’ and the other was the ‘Orange Blossom Special.'” Shoji has two of Acuff’s favorite violins, one of which was presented to him by the Grand Ole Opry in commemoration of his 50th year with them.

Shoji points out that even with the large band and cast in their show that it is a family venture saying, “My daughter Christina sings and dances in the show and, as I have previously mentioned, my wife Dorothy produces the show.” He said that he loves performing in Branson because it gives him more time to spend with his family and enables him to perform in his own theatre, which was specifically designed for him, and allows him to perform his show the way he wants to giving the audience the very best show possible.

When asked why people coming to Branson should come and see his show Shoji said, ” Our goal, each and every year is to have our guests come see the show and walk away saying, ‘I didn’t think it could get any better, but it has!’ and to make our guests feel, at all times, from the time they drive into the parking lot to the time they leave, that they are very special and deserve the very best. The show is always new and exciting and there is truly ‘Something for everyone.'”