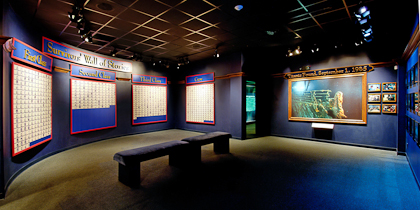 Titanic's "Survivors' Wall of Stories," tells "The Rest of the Story."*

BRANSON, Mo. As we approach the 100th Anniversary of the tragic sinking of the RMS Titanic in the early morning hours of April 15, 1912 the horrific loss of life and the ship that was touted as being virtually unsinkable are forever etched on the pages of history. Too, those pages testify as to the obvious fate of the over 1,500 passengers and crew who went to the bottom of the North Atlantic with her.

What has not been as obvious is what happened to the 712 passengers and crew members who survived that fateful voyage. Not anymore! The “New exclusive ‘Survivors’ Wall of Stories,’ at the Titanic Museum Attraction in Branson” presents, all in one place, information about the “the individual journeys of each of the survivors” after that fateful night.

On a daily basis, the Branson Titanic Museum Attraction, provides its “passengers” with an exciting opportunity to experience what it was like aboard the Titanic on its ill-fated maiden voyage. Among the many things woven into the exciting and educational experience are “400 artifacts directly from the ship,” a chance to walk up an exact full size reproduction of the ships Grand Staircase, feel first-hand what 28 degree water feels like, experience what the passengers and crew experienced as they tried to stand on the sloping decks of the ship as she sank and so much more.

A standard part of the Branson Titanic experience, ever since it first opened, is to give each passenger a Boarding Pass, with the name and information about one of the passengers or crew members who were on board the Titanic when she sank. This personalizes the experience for the “passenger” as they go through the museum as well as giving them an opportunity to see whether or not “they” survived by checking their name in the “Memorial Gallery,” which lists all passengers and crew members and whether or not they survived.

Mary Kellogg-Joslyn, the co-owner of the Titanic Museum Attraction with her husband John, said “So many guests ask us, ‘What happened to our passenger that survived on our boarding pass?’” She explained that until now there was no exhibit answering that question and they were answered by the crew members and staff of the Titanic on an individual basis based on available information. “Now, for the first time in the world, after two years of research, we have been able to put their lives together after they reached New York City almost 100 years ago,” she continued.

The research included contacting “Titanic Historical Societies around the world,” to get the information and documentation to tell the survivors stories. The result is an exclusive new exhibit for the Branson Titanic Museum Attraction that is the most complete public exhibit of information in the world telling what happened to the Titanic Survivors after they arrived in New York after being rescued.

The unique “Survivors’ Wall of Stories,” presents a picture, where available, and the stories of the vast majority of the 712 survivors, divided just as they were aboard the Titanic on their voyage, 201 from First Class, 118 from Second Class, 181 from Third Class and 212 Crew Members. Within each of those categories, the information is presented and sorted alphabetically. As of this date, out of the 712 survivors, the “Survivors’ Wall of Stories,” has information on all except for except for about 30.

Joslyn points out that the research is ongoing and that the exhibit will be updated with new information as it becomes available. As an example, she explains that six of the survivors were Chinese men and there is no record of what happened after they returned to their country. After visiting the museum, the Chinese government is now going to take part in helping to find out what happened to the Chinese survivors.

She said that the “Survivors’ Wall of Stories,” is just one example of how things are constantly changing at the museum to keep it fresh and exciting so that its guests always have a fresh new experience every time they visit. For additional information on the Titanic Museum Attraction or tickets for any of Branson’s other shows and attractions or for lodging arrangements please contact the Branson Tourism Center (BTC), one of Branson’s largest and most respected vacation planning services. BTC can be reached by either calling their toll free number 1-800-785-1550 or through their website www.BransonTourismCenter.com.