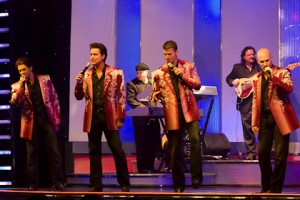 BRANSON, Mo. Either Jarrett Dougherty’s comedy or the great singing of Pierce Arrow alone is worth the price of the ticket, but put them both together with the singing of Desta and C.C. and you have one of the funniest and most musically filled entertainment values in Branson. From beginning to end it is easy to see why Pierce Arrow is one of the hottest shows in Branson.

During Ozark Mountain Christmas the show features their favorite comedy routines and music from their 2011 “regular season show” during the first half of the show. The second half of the show dedicated to Christmas.

From a comedy perspective, in this writer’s opinion, the ads for the show saying, “You want funny, we got funny” should read, “You want funny, we got very funny.” Whether he is “Floyd the Flusher” or his cousin “Chip,” Jarrett Dougherty is one of the funniest and most entertaining comedians in Branson and with the assistance of his straight man, Bobby Blackburn, who is also the band director will have you laughing consistently during the show. 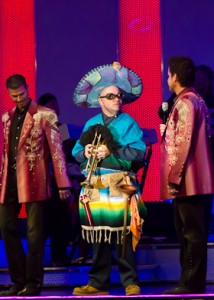 Jarrett Dougherty a.k.a. "Floyd the Plumber" explaining origin of "Ring of Fire."

Dougherty’s comedy is artfully woven into the show throughout. Among other things, you will laugh your way through one of the funniest doctors visits you’ll ever hear about and learn new things such as when a man can never be considered as a complete failure and the “real” history behind how the Johnny Cash hit, “Ring of Fire” was written, but above all you will laugh, laugh and laugh some more.

The vocalist and instrumentalists of the Pierce Arrow show are the type of entertainers that add the meaning to the reason some people call Branson the “live music show capital of the world.” The “Pierce Arrow Band,” consisting of Bobby Blackburn, guitar; Colt Straub, piano; Randy McConnell, bass and Will Henderson, Drums did an excellent job.

The quartet “Pierce Arrow is composed of Luke Menard, its newest member; Gary Korebia; Tim Storms and Scott Fraker. From their opening number “Listen to the Music” to their last number “American Soldier,” whether singing individually as a featured singer or as a group, it is easy to understand why “Pierce Arrow” is one of Branson’s most popular singing groups. From among many memorable numbers this writer particularly enjoyed their version of “Southern Born” from their regular season show and “Thank God for Kids,” featuring Scott Fraker and “Mary Did You Know,” by Gary Korebia from the Christmas show. 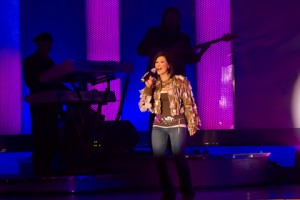 Desta singing "Piece of My Heart."

The featured female vocalist is Desta who, among others, did a wonderful job on “Piece of My Heart.” Young Miss C. C. Day, a Branson Junior High School student did a nice job on the Taylor Swift song “Our Song.” Desta and C.C. really got the audience rocking with their duet of the “Jingle Bell Rock” during the Christmas portion of the show.

The shows closing patriotic segment was powerful in terms of its message and its presentation. The combination of Jarrett Dougherty’s narrative about an American Soldier and Pierce Arrow’s powerful and exciting performance of the song “American Soldier” was a beautiful ending to a great show.

This writer saw the afternoon show, but it should be pointed out that Pierce Arrow also performs an evening show which, although it has the same cast, is an entirely different show with different music and comedy. If you love great singing and music and want to laugh until you hurt don’t miss the Pierce Arrow Show.

For additional information or tickets for Pierce Arrow or any of Branson’s other shows and attractions or for lodging arrangements please contact the Branson Tourism Center (BTC), one of Branson’s largest and most respected vacation planning services. BTC can be reached by either calling their toll free number 1-800-785-1550 or through their website www.BransonTourismCenter.com.