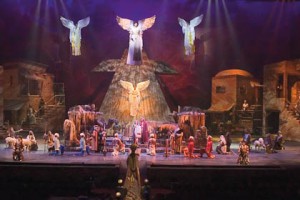 The spectacle and wonder of the Sight and Sound's "Miracle of Christmas."

“During Ozark Mountain Christmas, there is no better destination city in America to experience the traditional American Christmas spirit than in Branson, Missouri. That thought was reinforced in a spectacular, entertaining and inspirational way when this writer saw the “Miracle of Christmas,” at the Sight and Sound theatre. With spectacular sets, music, dance and drama, it tells the inspirational story of the greatest miracle of all, “For God so loved the world, that He gave His only begotten Son, that whoever believes in Him shall not perish, but have eternal life.”

The show tells the biblical account of the birth of Jesus and the events leading up to it, adding drama and characters to the for enhanced entertainment value and explore the human side of the birth of Jesus. It is a wonderfully told and presented fictional account of the factual events reported in the Gospels of Matthew and Luke conveying the true” reason for the season.”

It’s really neat to see this entertainment spectacular, about God’s promise to send a Savior, develop. It shows how He fulfilled that promise through Mary and Joseph and shares the human aspect of His plan as He uses the faithfulness of a simple couple from Nazareth to bring His Son into the world.

It doesn’t take too long to see the spectacle, color and production involved with this show as, from its very beginning, the audience is swept into a betrothal ceremony displaying the first of the shows spectacular sets, a large two story edifice surrounding a court yard in the center of Nazareth. It takes up the entire center of the 20,000 square foot 300 foot long wrap around stage. The talent of the cast is immediately apparent as Mary and Joseph sing of their love for each other and the cast joins together in a beautiful and lively celebratory dance.

The Miracle of Christmas ends “with flying angels and magnificent music, camels and wise men and shepherds at the manger honoring the Son of God after his birth. It is one of the most spectacular things most people will ever experience on a stage in terms of production, grandeur, entertainment, and sensory appeal. It is truly an amazing ending for a wonderful experience about what the celebration of Christmas really is all about.

“In between, there is a musical drama about the times, what type of Savior some were expecting, the oppression of not only Roman rule, but King Herod, and the strictness of Jewish law and custom. However, it is the personal glimpse into the lives and relationships of the biblical characters associated with the birth of Jesus such as Simeon, Zacharias, Elizabeth, Mary and Joseph which creates the drama and, even within the context of a story that everyone knows the outcome, suspense. The personal turmoil that Mary and Joseph, their families, and community had to work through because of the miraculous pregnancy of Mary and the faith and perseverance that it took to get from the betrothal ceremony in Nazareth to the birth of Jesus in a manager in Bethlehem is in itself a miracle.

“It is a modern production miracle that the cast members; animals, from camels to horses, riders and more; flying angels coming down from on high and the effort necessary to change the spectacular sets used, come together in a production that flows as smoothly and enjoyably as this show. Combine that, with the talent of the cast, both dramatically and musically, lavish costuming and the story of the greatest gift this world has ever received and the “Miracle of Christmas” is not only an exciting entertainment spectacle, but a Christmas blessing for those who know Jesus as their Lord and Savior as well as those who do not.”

For additional information on the “Miracle of Christmas” please call the Branson Tourism Center (BTC) one of Branson’s largest and most respected vacation planning services and sellers of Branson show and attraction tickets and lodging. BTC can be reached by calling 800-785-1550 or through its website www.BransonTourismCenter.com.