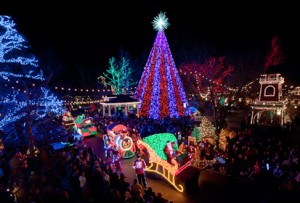 BRANSON, Mo. From trees to Nativity scenes and lots in between, Christmas lights add a special beauty and glitter to Branson’s celebration of the traditional American Christmas. Since its inception over 20 years ago, Christmas Lights have played a very important part of Branson’s Ozark Mountain Christmas adding a glow to the Ozark Hills that spreads from the wonder of Silver Dollar City’s Old Time Christmas to the giant Nativity Scene on Top of Mount Branson overlooking Branson Landing and downtown Branson.

Recently Branson was listed as number six, by Yahoo! Travel in an article entitled “Top 10 Destinations for Holiday Lights,” written by Elissa Richard. “It’s amazing that a little town in southwestern Missouri is listed on the same list with New York City, Walt Disney World, Chicago and others,” said Tammy Johnson, the Director of Operations for the Branson Tourism Center. “What a testimony to the great experience Branson guests can expect during Ozark Mountain Christmas,” she continued.

The article points out that Branson is transformed into a “veritable winter wonderland each holiday season, bursting at the seams with lavish light displays…”It specifically mentions Silver Dollar City’s An Old Time Christmas, describing it as “an elaborate light-and-music show showcasing no fewer than 4 million radiant lights and 1,000 decorated Christmas trees” including the “5-story Special Effects Christmas Tree which, along with the surrounding square, beams with over a million lights that ‘dance’ to select Christmas tunes and the holiday light parade with light-embellished musical floats that runs twice each evening.”

“And that’s just the Christmas lights at the major displays,” said Johnson. Indeed, when all the rest of the lighting and decorations that the city of Branson, Branson Landing and Branson’s shows, attractions and other businesses have done is factored in with the giant Nativity Scene that overlooks historic downtown Branson, it’s hard to envision a city that will be more aglow with either Christmas lights or the true spirit Christmas than Branson, Missouri.