Pierce Arrow is just one of the many Branson shows that will be holding special New Year's Eve Shows.

“What better place than Branson, Missouri for families to say, ‘Goodbye’ to the old year and welcome in the New Year?” asked Stephanie Milton, Director of Marketing for the Branson Tourism Center. “When it comes to family entertainment and fun there is no place like Branson and from the morning of New Year’s Eve, December 31, to the traditional New Year’s Eve celebration at midnight, there are numerous interesting and exciting ways for families to celebrate the occasion together,” she continued.

As would be expected in the place called “The live music show capital of the world,” Branson will offer a variety of exciting live shows.. The Official Branson.Com Show Schedule, powered by the Branson Tourism Center, indicates that the following shows, sorted alphabetically by time, will be open on December 31. In addition, if a show has indicated they are doing something special to celebrate New Year’s Eve the words “New Year’s Eve Show” follows the shows name. Click here for information on the specifics of each show’s celebration.

Circle B Supper Show
The Rat Pack – Live and Swingin’

Christmas on the Trail 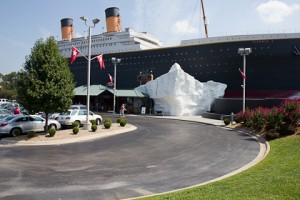 The Titanic Museum Attraction is just one of many Branson Attractions that will be open for Branson visitors to enjoy.

Although Silver Dollar City will be closed for the season, from the magnificent Titanic Museum, to ziplines, and so much more, the vast majority of Branson’s attractions will also be open over New Year’s weekend. The Titanic, always interesting, fresh and exciting is even more so as it remembers the 100th anniversary of the sinking of the great ship.

Other highlights would include the areas two major drive through Christmas Lighting displays and their millions of glittering lights, the Branson Area Festival of Lights and Shepherd of the Hill’s Trail of Lights. One of Branson’s most unique Christmas events is “White Flight,” at the Butterfly and Rainforest Adventure, with thousands of white butterflies, live statute art and much more. The ships of Branson Landing Cruise Lines, the “Lake Queen” and the “Lake Princess” will be sailing throughout the day and also have special New Year’s Eve cruises.

“From shows to attractions, great shopping, cruises and so much more, Branson is the ideal place for families to celebrate New Year’s together,” said Branson Tourism Center’s Milton. She also advises that weather and other factors could cause schedule changes etc and offers the services of the Branson Tourism Center in answering any questions anyone might have about any of the activities mentioned in this article or for assistance with tickets or lodging arrangements. BTC can be reached by either calling their toll free number 1-800-785-1550 or through their website www.BransonTourismCenter.com.