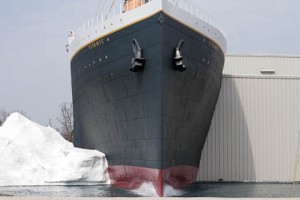 Branson's Titanic Museum always an exciting voyage back into history is even more so during 2012 as the 100th anniversary of its sinking is remembered.

When one thinks of Branson, Missouri many things instantly come to mind, fun, excitement, variety and value to name a few. The word “gift” might not often come to mind, but at this special time of the year describing what Branson represents as a “gift” might be totally appropriate.

Particularly at this time of the year, when the word “gift” is used people think of Christmas presents, but as the term is used in this article a “gift” is “a notable capacity, talent, or endowment.” Branson is notably endowed with the natural beauty of the Ozarks, three pristine lakes, spectacular shopping, more than 100 shows filled with some of the most talented performers anywhere and a variety of exciting fun filled attractions unmatched anywhere.

Where else can a person go in this country where, less than 10 minutes away from a 45,000 plus acre lake, Table Rock Lake, they can be sitting in a theatre seat watching one of Branson’s numerous live shows? Is there a another place where a family can share a “voyage” aboard a half scale replica of the R.M.S. Titanic at the Titanic Museum Attraction during the day and enjoy a wonderful cruise on Table Rock Lake, dinner and great entertainment aboard the magnificent Branson Belle?

Is there another place in America where an attraction such as the 1880’s theme park, Silver Dollar City, Branson’s largest and most popular attraction and its dozens of exciting rides, shows, demonstrating craftsmen, has been built over a Natural National Landmark such as “Marvel Cave?” One has to wonder how many theme parks anywhere have been integrated into the natural environment surrounding them as Silver Dollar City has to become a virtual part of the Ozark Mountains surrounding it and whose history, crafts and culture it preserves and shares with the world?

Is there anywhere else that has the variety of attractions that Branson has? From the World’s Largest Toy Museum and the Ralph Foster Museum at the College of the Ozarks, called the “Smithsonian of the Ozarks” to the Veterans Memorial Museum, the Hollywood Wax Museum, Ripley’s Believe It or Not and many other activities; Branson’s attractions provide an opportunity for fun and excitement that would be notable anywhere. 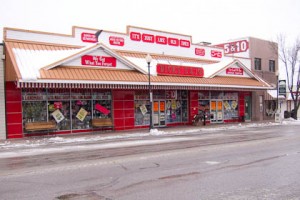 In the snow of winter or the heat of summer, Dick's 5 & 10, in historic downtown Branson, is just one example of the unique shopping Branson has to offer.

Branson is a shopping Mecca for shoppers endowed with one of the most varied shopping experiences available anywhere. From hand crafted items in Silver Dollar City and many of Branson’s other specialty shop to two major outlet malls, Dicks 5 & 10 in historic downtown Branson and the $150 million Branson Landing, Branson offers a unique shopping experience not available anywhere else.