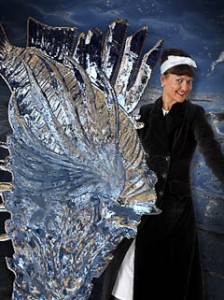 BRANSON, Mo. “Becoming a tradition over the last five years, one of the most anticipated events of the Winter Season in Branson is the annual ice carving competition held at The Titanic Museum Attraction each year,” said Tammy Johnson, the Director of Operations for the Branson Tourism Center. “As exciting and amazing as the first five have been, this year’s event, being held in Branson on February 4 and 5 promises to be even more exciting because it will be the National Ice Carving Association’s (NICA) National Finals and a ‘preliminary for competitors to end up in the city of Sochi, Russia, the host city for the XXII Olympic Winter Games in 2014,'” she continued.

In addition, the competitors will be competing for the largest NICA Prize Purse to date, $25,000 in two categories, “Master” and “Professional” with competitors creating beautiful pieces of art from 250 pound blocks of ice within a prescribed period of time. New this year will be a ” Speed Carving Competition at the end of each day which will result in the crowning of a “National Speed Carving Champion.”

“We are very excited to have the Titanic in Branson host the 2012 NICA U.S. Nationals. This two-day ice carving competition brings the nation’s best ice carvers together for a chance at the title of NICA U.S. Nationals Champion. This will be one of our premier stops on NICA’s International Tour Champions Ice Carving Competition Circuit, currently the largest circuit in the world,” said Jeff Petercsak, Executive Director, National Ice Carving Association.

NICA, is an association with the stated objective of promoting ice sculpture through education, competitions, standardized judging, and exhibitions and is headquartered in Oak Brook, Illinois. In addition to competing for thousands of dollars in cash prizes, the carvers will also be competing for professional recognition within NICA and seeking points under NICA’s certification program

Six years ago, prior to the holding of the very first Ice Carving Competition, Mary Kellogg Joslyn, co owner of the Titanic with her husband John Joslyn, said it was a “first for Titanic and for Branson.” She emphasized that it was the first of many special family events coming to the Titanic designed to give their guests something new and exciting to see every time they visited. The fact that the Titanic is hosting its sixth Annual Ice Carving Competition, as part of a continuing series of special family events, illustrates its commitment to making each visit to the Titanic a fresh exciting experience.

Branson Tourism Center’s Johnson says that the event annually draws thousands of visitors and expects that this year’s event will draw even more, not only because of the NICA National Championship, but because 2012 is the 100th anniversary of the sinking of the Titanic and suggests advance reservations for lodging and shows. She also points out that time is running out for people to participate in the Titanic’s “Rose Petal Memorial Tribute,” a unique, historical and once in a lifetime event. For additional information or tickets for the Titanic, the Ice Carving Competition or any of Branson’s other shows and attractions or for lodging arrangements please contact the Branson Tourism Center (BTC), one of Branson’s largest and most respected vacation planning services by either calling their toll free number 1-800-785-1550 or through their website www.BransonTourismCenter.com.