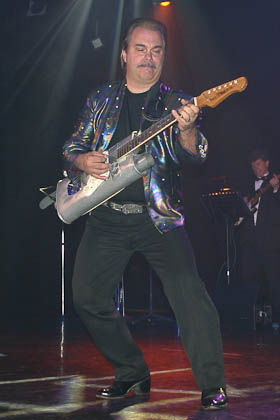 BRANSON, Mo. Doug Gabriel’s vocal and instrumental talents have been a staple on the Branson show scene since 1985 when he first started performing in Branson. For years he opened for many of the major stars, including Roy Clark himself, at the Roy Clark Celebrity theatre and has been voted the “Male Vocalist,” “Entertainer,” and the “Instrumentalist of the Year.” In 1994, he and his wife Cheryl, also an accomplished vocalist, started their own show. They will be starting their 27th year in Branson and 18th year of their own show when the 2012 edition of the Doug Gabriel Show opens on March 2.

“Branson – Up Close and Personal,” is a service of the Branson Tourism Center, one of Branson’s largest and most respected vacation planning services, and is intended to provide readers with an up close and personal look at a Branson star or personality. The interview with Doug Gabriel uses a “Question and Answer” format with the interviewing being done for the Branson Tourism Center (BTC) by Gary J. Groman, a 26 year resident of the Branson area, local columnist and free lance writer.

BTC: How long have you been performing in Branson?
DG:  I’ve been in town about 27 years. I started in 1985 with Chisai Childs at the old Starlite Theatre. I also played at Cody Country with the Cody Brothers and played with “Celebrity Sound” at the Roy Clark Celebrity Theatre where we led in for the major stars and Roy Clark who performed at the theatre.

BTC: When did you start your own show?
DG: In 1994 at the Jim Stafford Theatre.

BTC: Last year you moved from the Jim Stafford Theatre to the Music City Center Theatre. What’s one of the most exciting benefits of the move?
DG: The opportunity to do night shows.

BTC: How did you end up coming to Branson?
DG: I came to Branson to check it out and reconnected with Chisai Childs, who we had played for in her theatre in Grapevine, TX, and ended up performing in her show.

BTC: What is your first memory of Branson?
DG: Going to the Bob-O-Links with my grandfather Glenn Gabriel when I was a boy. [Now, these many years and owners later, it is the Clay Cooper Theatre.]

BTC: What’s your favorite thing to do in Branson when you are not performing?
DG: We enjoy playing tennis and swimming as a family.

BTC: If you could perform or meet with any entertainer/person (living or deceased) who would it be and why?
DG: From a music perspective it would be Elvis because of his music.

BTC: Do you have a “little known” fact about yourself that you think our readers would enjoy?
DG: I’m a worrier.

BTC: What is the funniest thing that has happened to you in front of an audience?
DG: When a bat came out during the gospel portion of a road show we were performing and was flying over the audience really getting them excited as they ducked and dodged it as it flew around and swopped down. When we got to the patriotic part of the show I said to the audience, “We should probably sing the “Battle Hymn of the Republic.” Well it was funny at the time.

BTC: Do you have an instrumental and vocal number that you believe that your audiences expect you to do?
DG: Yes, “Malaguena” on the acoustical guitar and either “Unchained Melody” or the “American Trilogy.”

BTC: What part of your show do you enjoy performing the most and why?
DG: The first four songs of the show because it gives me the opportunity to form a relationship with the audience and get them involved with the performance.

BTC: Has the featured female vocalist in your show been with you for a while?
DG: She sure has. It’s my lovely wife Cheryl to whom I have been married for 28 years and who has blessed me with three beautiful children, Josh, Jordon and Jasmine who also participate in the show.

BTC: Is the “Mufftar” still in the show.”
DG: Absolutely, where else in the world can people hear a one of a kind sound from a one of a kind instrument made out of a 1969 Ford Thunderbird muffler. It’s amazing to feel the audience respond as they react to the sound coming from a muffler. [The “Mufftar” is a unique instrument made from the muffler of a 1969 Ford Thunderbird muffler by Doug’s dad, Don, when Doug first decided he wanted to play the guitar as a child.]

BTC: What one thing in your show do you want the readers to know about?
DG: While we will continue to do the favorites our audiences expect, which are all top hits, we will expand our musical variety to present other hits that they will readily recognize. There’s not a bad song in the show.

BTC: If I were planning a trip to Branson why should I plan to see your show?
DG: We provide a unique and wonderful entertainment experience that celebrates God, family, friends, life and country through the timeless musical hits of the decades.

BTC: If I were coming with children ages 8 through 15  would you answer be the same and why?
DG: Yes because the material in the show appeals to all ages and those ages 8 through 15 will also relate to the performances of Jasmine and Jordon during the show.