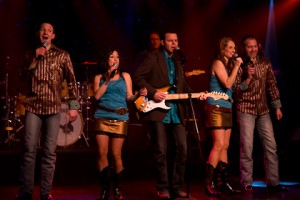 BRANSON, Mo. Grand Country’s Comedy Jamboree has plenty of comedy, but it is so much more. It has one of the best live bands in Branson, great singing and dancing and provides two hours of exceptional music and comedy that truly has something for everyone.

As this writer watched the show on Feb. 2, he was equally enthralled with the  musical talents of the cast and the presentation of each number. The shows vocal group, the “Jamboree Singers,” its “Grand Band” and lead male vocalist did a great job from a musical point of view that, when combined with the production and choreography accompanying each number, results in some of the best live musical entertainment  on any Branson stage.

The primary vocal role is carried by the shows vocal group, the “Jamboree Singers” composed of Jackie Brown, GiGi Hutchinson, Jon Drockelman and Justin Tews. From the show’s opening number, “Love Somebody” to its last, “This Is America,” both together and as featured soloists, the vocal talents of this group and its individual members is obvious. The shows lead vocalist and Master of Ceremonies is “Branson’s Country Gentlemen,” Todd Bradshaw.

The “Grand Band,” is composed of some of Branson’s finest instrumentalists. They are Tracy Heaston, Piano/Keyboard, who is also the shows Musical Director; Wayne Massengale, Fiddle, Acoustic Guitar, Electric Guitar and Dobro; Larry Allred, Bass Guitar; Rob Blackburn, Drums and Matt Hanshaw, lead and acoustic guitar. To say that they do an outstanding job would be an understatement.

Those are the show’s individual musical elements, but it is the way they are all brought together by the show’s director and producer, Mike Patrick and associate producer Andy Holloway with the staging and choreography of GiGi Hutchinson that makes this show such a great musical experience. Virtually every number involves not only vocals, but choreography and the integration of various elements and performers into its performance. Two examples would be “The World,” beautifully sung by Todd Bradshaw featuring Wayne Massengale on the fiddle and the number “Just A Kiss,” beautifully sung by Jon and Jackie as GiGi and Justin performed an exquisite dance routine. The number was as much joy to watch as it was to hear.

And that’s just the musical part of the Comedy Jamboree. The performance that I saw featured Shannon Thomason as “Apple Jack,” and Adam Western as “Rusty Bucket,” who, from the preshow to the final comedy skit, seemed to come along at just the right time to tickle the funny bone with a stream of one liners and comedy skits. One feature of the show’s comedy is its intensive audience participation and the added fun it provides. This writer can guarantee laughter and that, among other comedic experiences, you have never seen a polka like these guys do and you will know for a certainty exactly how many of each type of animal Moses took on the Ark with him. It should be pointed out that Western was filling in for the shows other regular comedian, Perry Edenburn as “Harley Worthit” while he is fulfilling another engagement.

What a delightful way to spend an afternoon. For additional information or tickets for the Comedy Jamboree or any of Branson’s other shows and attractions or for lodging arrangements please contact the Branson Tourism Center (BTC), one of Branson’s largest and most respected vacation planning services. BTC can be reached by either calling their toll free number 1-800-785-1550 or through their website www.BransonTourismCenter.com.