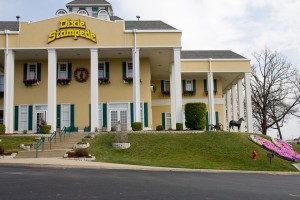 Picture of Dixie Stampede, located not 150 feet from the Dick Clark ' American Bandstand Theatre, which, like the vast majority of Branson's tourist related businesses, was left virtually unscathed by the tornado.

Leap Year Day 2012 is not a day most in Branson will ever forget, as an EF-2 Tornado seemingly hop skipped along through Branson traveling west to east down the famed “Branson Strip,” Highway 76. Almost with surgical precision it hit certain properties and missed others, damaged some more than others and moved on without having caused any fatalities or damaging the vast majority of Branson’s entertainment infrastructure.

National media coverage to the contrary, the reality is that Branson, although hit just two short day ago by a tornado, is ready to provide its visitors with the same great vacation and entertainment experience for which it is known. That might be hard for some to believe based on the “disaster biased reporting” they have been bombarded with this week by national and regional news coverage of the event.

As they filled the airways with pictures showing damaged theatres and properties, they completely ignored another reality of what happened. Unlike in Joplin and other areas hit by tornadoes and the picture of complete devastation they were trying to “paint,” the tornado that hit Branson did not wipe out a wide swath of everything in its path, but rather, almost with surgical precision, hit one spot and jumped on to the next as it moved through Branson leaving everything in between unscathed. The result, although devastating to those properties it hit, is that the vast majority of Branson’s businesses, shows, attractions, shopping and other activities were not damaged by the tornado. 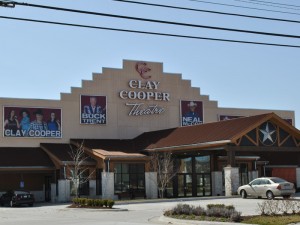 The day after Branson's Leap Day tornado, the Clay Cooper Theatre is still ready to open on schedule.

The “disaster mentality” biased reporting of the national and regional media chose to emphasize a relative small part of the reality of what happened and is happening. As they showered the nation with pictures of damaged theatres, such as “Dick Clark’s American Bandstand Theatre,” they failed to report on the reality that just across the street was “Dolly Parton’s Dixie Stampede,” which, like the vast majority of Branson’s theatres, attractions and entertainment infrastructure was not damaged. As they reported on a “Branson Strip” that was, at the moment,  closed to traffic and littered with windblown debris and utility poles, they failed to report that it was expected to be clear and open to traffic the next day.

As this is being written, the Branson Strip is open, as are the vast majority of Branson’s shows, attractions, shopping and other activities, to receive visitors and provide them with the same great entertainment experience it always has. Steve Presley of Presleys’ Country Jubilee, Branson’s first show on the Branson Strip said, “Opening our 46th season in the same location on Hwy 76 just became a little more special with this week’s tornado. While offering our prayers and sympathies to those impacted by the tornado, we are thankful that our theater received no damage and we will be opening right on schedule next Friday March 9th at 8 pm.”

Presley’s sentiment and what is happening at his theatre is exactly what is happening all around Branson. While praying and caring about those who were impacted by the tornado, Branson is preparing to do the one thing it does best; providing the same unique, fun filled and exciting vacation experience it always has as it and enabling its guests to “Experience memories that will last a life time.”

Note: For continuous updates and information relating to the status of Branson after the tornado, click here.