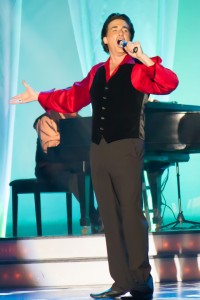 BRANSON, Mo., July 17, 2012 — Branson is unsurpassed for the quality, variety and format of the of the music shows it offers, but there is only one show that has the magnificent tenor voice of George Dyer. Simply and appropriately, that show is named The George Dyer Show.

This writer wishes he had a dime for every time he has heard words to the effect that “It’s probably not my kind of show because I am not into opera.” Well, in fact, although there are two classical pieces woven into the fabric of this great show, the vast majority of its music has nothing to do with “opera.” It’s about a wonderfully entertaining live musical experience covering a wide variety of music ,from Puccini to Disney, Buble’, Dylan, Darin, Simon and Garfunkle, George Gershwin and many more, performed by the finest tenor voice this writer has ever heard.

And speaking of “live, “when one calls Branson, “The live music show capital of the world,” the meaning to the word “live” has its roots in shows like this one. You will hear no sound tracks during the musical performance of this show, just the power and beauty of George’s magnificent God given tenor voice, those of his family and a fabulous live band consisting of Norman Bergen, Pianist/Conductor; Bogie Bohinc , Lead Guitar; Rob Wilson, Drums, Seth Darby & Marcus Willet, Bass Guitar and Wayne Leavitt, Keyboard. The sound of this band and their ability to adapt to the many types and styles of music presented during the show is amazing.

From opera, to Broadway hits, show tunes to gospel, love songs and more, George demonstrates his vocal prowess, power and range on a variety of numbers. From the Michael Buble’ hit “Feeling Good,” Mario Lanza’s “Be My Love,” “Go The Distance” from Disney’s “Hercules” to Puccini’s “Nessun Dorma” from the opera “Turandot,” Lenard Cohen’s “Hallelujah” and many more , it is hard to imagine a more spectacular or entertaining vocal concert by any performer. Couple that with his genuine warmth and innate ability to relate to his audience and you have that special total musical entertainment experience that one remembers for a lifetime. 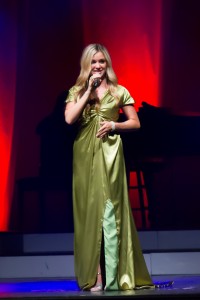 The lovely and talented Kendra Dyer performing "Colors of the Wind" from "Pocohantas."

In a show filled with many magnificent and wonderful musical moments and highlights, George’s performance of “Go The Distance,” “Bridge Over Troubled Water,” “Hallelujah,” the guitar-vocal duet of George and Bogie Bohinc of “To Make You Feel My Love” and his hauntingly beautiful rendition of “Time To Say Goodbye” were among this writer’s favorite numbers. A real crowd pleaser was when George took a “Branson Show Guide” and, using the music of Luigi Denza’s “Feniculi Fenicula ” changed the song’s lyrics to musically incorporate each show as he sang through the guide. It makes one shudder with anticipation just wondering what he could do with the “Branson Phone Book.

George’s family, wife Clarisse, and daughters Kendra and Kassisdy also contribute their considerable vocal talents adding another wonderful dimension to the overall enjoyment of the show. George and Clarisse’s duet of “A Whole New World” from “Alladin;” Kendra’s beautiful rendition of Ingrid Michaelson’s “The Way I Am” and Kassidy’s spirited performance of Adele’s “Rolling in the Deep” demonstrate the musical talent of this family. One of the shows highlights occurs when they are joined on stage by son Garrett and present an acapella version of “Nearer My God To Thee.” It is simply beautiful.

Although the music is certainly suitable for, and kids will be familiar with many of the songs, this is a pure music show as opposed to the musical variety format with comedians etc. That said, it is presented in an environment of “personal family warmth.” From the moment George comes on stage, his interaction with the band, the “women of his life” and his audience creates an unmistakable and special “us and our family to you and your family” bond. Add to that one of the finest Tenor voices you will ever hear, beautifully singing a broad variety of music, the vocal talents of his family and musicality of one of the finest bands in Branson and the result is a spectacular, almost magical, and certainly unforgettable musical experience.

For additional information or tickets for the George Dyer Show, or any of Branson’s other shows and attractions or for lodging arrangements, please contact the Branson Tourism Center by either calling their toll free number 1-800-785-1550 or through their website www.BransonTourismCenter.com.
.