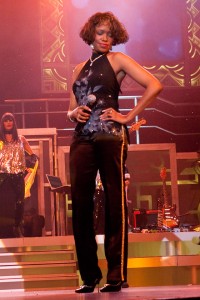 BRANSON, Mo., October 5, 2012 — Whitney Houston was often referred to as “The Voice” because of the beauty, power and range of her voice. At the time of her untimely death in February of this year, according to the Guinness Book of World Records, she was the most awarded female singer of all time having received, among others, six Grammy Awards, two Emmy Awards, 30 Billboard Music Awards, 22 American Music Awards and six People’s Choice Awards.

Starting November 1, “The world’s greatest tribute show, Legends in Concert, will have celebrity impersonator “Jazmine” performing her tribute to Whitney Houston. “We are very excited to have Jazmine return to the stage here at Dick Clark’s American Bandstand Theater this winter in Branson. Her tribute to Whitney Houston will give you chills as you experience ‘The Voice’ as never before,” said Tiffany Powers, Marketing Director for Legends in Concert.

After a successful career in Europe, “Jazmine” came to the United States and “made her debut to the Latin-American community by participating in the TV show, ‘Sueños De Fama”’ where she sang in eight episodes in the show airing on Telemundo worldwide. She appeared “on the WB network TV-show ‘PopStars’ and “made her first appearance as a ‘Whitney Houston’ impersonator on ‘Your Big Break’, a Dick Clark Productions / Buena Vista Television production, which aired nationwide from November 2000 thru August 2001. For the past 9 years,  has been performing as a Whitney Houston Tribute Artist in venues around the world.”

The foundation of the Legends in Concert show is celebrity impersonators recreating legendary superstar performers. Each recreation is a wonderful artistic performance incorporating the voice, mannerisms and looks of the star being recreated which is fabulous in and of itself. When combined with the shows dancers, support vocalists, live band and great production, costuming and choreography, the result is a spectacular one of a kind entertainment experience. In addition to “Whitney Houston” the show will also feature recreations of “Liberace,” “George Strait, “Elvis” and the “Blues Brothers.”

Tiffany Isnard, Director of Marketing for the Branson Tourism Center said, “Legends in Concert is a prime example of the quality and diversity of the live entertainment that Branson offers on a daily basis.” For additional information or tickets for the Legends in Concert Show or any of Branson’s other shows and attractions or for lodging arrangements please contact the Branson Tourism Center, one of Branson’s largest and most respected vacation planning services by either calling their toll free number 1-800-785-1550 or through their website www.BransonTourismCenter.com.