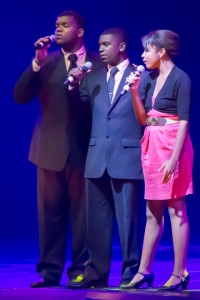 “The Voices of Glory,” siblings Michael, Avery and Nadia Cole who started singing together in 2007 when they sang to their mother who was in a coma as the result of “a head-on collision with a drunk driver.” Their mother came out of the coma, those who heard the Coles sing realized they were hearing something special, they adopted the stage name “Voices of Glory,” kept on singing and in 2009 ended up as a top five finalist on the NBC prime time hit show, America’s Got Talent. Since then, among other things, toured “internationally, performing at the Annual GMA’s Dove Awards, the 2010 & 2011 ICM Awards, at Madison Square Garden, were a featured act in ‘Andy William’s 2012 Christmas Show,'” and performed in “Germany for Weihnachtszauber.”

Jason Hughes, one of the Hughes Brothers co-producing the show said, “In Ayo we’re taking the audience on a journey of joy using song, dance, lights, and the personalities of Michael, Avery, and Nadia, backed up by a live band.” In describing the show, Nadia Cole said, “Ayo adds another level to the Branson show mix. While Ayo features our original music, and of course our gospel favorites, it also reaches out to visitors of all ages with current and familiar songs that speak to the musical soul.” Michael Cole said, “We love the music and we love what music can do for people.  In Ayo we want the audience to feel what we feel when we sing – a pure call to joy!” and his brother Avery adds, “Ayo is also a slang term for ‘Hey you’…and we’re hoping that just like that term reaches out and grabs your attention…that Ayo will reach out and grab your heart!”

Tammy Johnson, the Director of Operations for the Branson Tourism Center, congratulates both the Hughes Brother’s Theatre staff and Voices of Glory on the new show. She points out that although Ayo’s premier is not until March 18 that it at the Hughes Brothers Theatre opened its 2013 season in January and is currently running a full schedule of shows. For additional information or tickets for “Ayo,” “it” or any of Branson’s other shows and attractions or for lodging arrangements please contact the Branson Tourism Center through their toll free number 1-800-785-1550.