BRANSON, MO, March 22, 2013 — The Hamner Barber Variety Show in Branson is truly a magical experience presenting some of the most unique and fascinating illusions and ventriloquism ever seen on a Branson stage let alone in one show. Regardless of age, this show captivates and holds the interest of its audience from beginning to end as each of its elements magically unfolds into two hours of amazement, fun, comedy and excitement.

The “variety” in the show comes from its two main elements, the magic and illusions of Dave and Denise Hamner and the ventriloquism and comedy of Jim Barber and his “friends.” It’s almost magic the way these diverse skills, each performed by master craftsmen, are seamlessly blended together into the amazing entertainment experience that is the Hamner Barber Variety Show.

From their very first illusion, it is easy to see why Dave and Denise Hamner have won numerous awards including having received the “Merlin Award” from the International Magician Society on more than one occasion. Surprise and wonder is a large part of magic for the audience so while maintaining that prospect, this writer can say it’s hard to imagine illusions being performed with anymore skill, showmanship and personality than in this show. From the artful way the shows dancers, AJ Heard, who is also the shows choreographer, Ken Brown and Gwen Bliss are choreographed into the illusions to the costuming and sets, each illusion is a wonderful entertaining production.

The Hamner’s opening illusion, really illusions, sets the show’s tenor and takes the audience on a magical adventure. Without spoiling the surprise, it is safe to say that it will add new meaning to the phrase, “That’s for the birds,” and is a “high flying” combination of beautiful birds and sleight of hand magic that is as entertaining as it is amazing.

And that’s just the beginning of the magic. There are subtle illusions such as Dave Hamners amazing, up close card manipulations, production numbers such as the inspirational “Ark of the Lost Covenant” and the excitement and danger of the death defying “Vertigo” to name a couple of this writer’s favorites. The Hamner’s unique performance of the classic illusion “Origami” is another example of the way they keep audiences on the edge of their seats anticipating what is coming next. 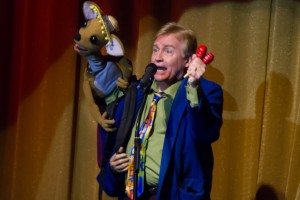 Jim Barber and one of his friends, the loveable and funny "Pecos Pete."

Jim Barber, a world class ventriloquist and comedian keeps the audience amazed and in stitches. His entertaining and one of a kind performance of the “Barber of Seville,” staring who else, but “Barber” and “Seville,” to the “baby” and “Chico Pete,” the most unusual and funny Chihuahua you have ever met. They add another funny and entertaining element to the show as they demonstrate why he has won numerous awards and, among other major national appearances, has been on the Dave Letterman Show.

Barbers performance goes beyond the mere quality and breadth of ventriloquism skills and his comedy. The way he relates to the audience and gets them invested in the performance is, in its own way, a wonderful “magical” part of the entertainment experience the show provides.

In Branson honoring America’s Veterans is something that the vast majority of its shows do. The Hamner Barber Variety Show however has a special interactive Veteran’s salute that, from, its original music and video content, to the shows spectacular and inspiring final illusion, is as spectacular and magnificent as the sacrifice and commitment of those that it honors.

One cannot sit in the audience of this show and not notice how the audience, regardless of age, reacts to it. The audience was “into” this show from beginning to end, whether it was applause, the sound of laughter, or some other reaction, it was obvious that the audience was having a great time and enjoying the show. I had two “shadows” with me who had never seen the show before, thoroughly enjoyed themselves and heartily recommend it.

In a previous review of this show I wrote, “A person attending a professional production magic show expects a show consisting of great illusions artfully presented by a master illusionist. Those attending a comedy ventriloquism show expect great ventriloquism liberally laced with comedy. What not many expect however, is to attend one show where one of the world’s funniest and best ventriloquists combines with a master illusionist for two of the most magical, funny, inspirational and exciting hours of entertainment in Branson, the Hamner Barber Variety Show.” After having seen the 2013 edition of the show I can simply say, “Ditto.”

For additional information or tickets for the Hamner Barber Variety Show or any of Branson’s other shows and attractions or for lodging arrangements please contact the Branson Tourism Center, one of Branson’s largest and most respected vacation planning services by either calling their toll free number 1-800-785-1550 or through their website www.BransonTourismCenter.com.