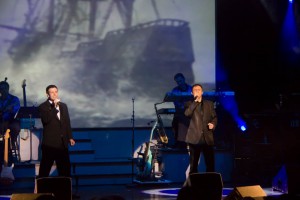 BRANSON, MO, May 14, 2013 – In a previous review of this show I said, “One does not just ‘see’ the Rankin Brothers Show they experience it and what a wonderful experience it is. From beginning to end it is a wonderful musical journey through the classic music hits and super stars of the 50s through the 90s. It will bring back memories to those who actually heard the music in real time and create new memories for a generation that was not even born when this timeless music was first performed.” Those words were true when I wrote them for the first time and, after seeing the show the evening of May 10, all I can say is “Ditto!.”

From their full cast opening number of Neil Diamond’s 1966 hit “Cherry, Cherry” to their finale, Chuck Berry’s 1958 rock and roll hit, “Johnny B. Goode” the Rankin Brothers Classic Music Revue is a non-stop musical entertainment extravaganza presented by some of the most talented, energetic and “audience personable” vocalists and instrumentalists in Branson. And it’s more than just talent; during the two plus hours that the show runs, as the cast performs over 50 numbers, it is obvious to the audience that they love not only doing what they do, but the music they are performing. It was interesting to watch the audience reaction as people who were not even born when many of these songs were popular seem to “catch” and share the excitement, fun and emotion of Mark, Matt and the rest of the cast. It makes for a very special, fun filled and entertaining experience. 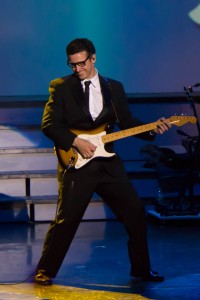 Although, if you closed your eyes and just listened to many of the songs being performed you would swear that you were hearing the original artists, the show is not a “recreation” show like the “Legends of Concert.” It is more a “replication” of the classic songs “the way you remember hearing them.” As one who heard a number of these performers and groups “real-time” during the height of their careers, I can attest to the fact that it is that and much more. And it gets better because in a number of songs, quite a few as a matter of fact, that sound is enhanced by the “appearance” of the performer themselves such as, among others, “Sonny and Cher,” Mark Rankin and Lori Kelley; “Elvis,” Mark Rankin; “Buddy Holly,” Matt Rankin and many more which adds variety, excitement and, in some cases, a little comedy to an already excellent show

The set, costuming and the use of full screen videos in the background and on the sides all add to the overall entertainment experience, but it is the musical performances that touch the heart and provide the wonderful memories and experience that is the Rankin Brothers show. The show’s stars, Matt and Mark Rankin are two of the most talented vocalists and guitar players in Branson both on their own and from a “replication” stand point. Whether it’s a duet performance of the inspirational “The Anchor Holds;” Matt’s performance of “Buddy Holly,” Mark’s tribute to “Elvis Presley” based on his “Aloha From Hawaii” concert or any of the dozens of other numbers they perform it is easy to see why they have won so many Branson awards and are so popular with their fans.

The casts two female vocalists, the very beautiful and talented Lori Kelly and Amy Cofer make up the “Rankinettes” who are not only the backup singers on the majority of the numbers, but perform solos throughout the show. They sing as beautifully as they are beautiful and their voices and infectious energy makes an already wonderful entertainment experience even more so. Add to that a live band composed of Cody Titus, Keys; Jim Murphy, Saxophone and Keys; Mitch Keirsey, Lead Guitar; Paul Stephans, Bass and Harmonica and Jeremy Castaldo, Drums and things just keep getting better. 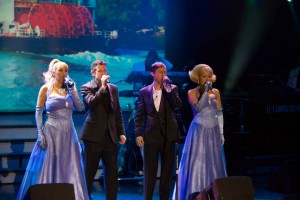 If I were to pick some of my favorite numbers from among the many in the show, I would have to start with the all cast presentation of the American folk classic, “Shenandoah;” it was simply beautiful. On an individual basis Matt’s performance of “Peggy Sue” during his Buddy Holly Tribute brought back some wonderful memories and Marks performance of “My Way” during the “Elvis Presley Tribute” was wonderfully done. Lori Kelly did a great job with the Bette Midler song, “The Rose” as did Amy Cofer with the Chordettes 1958 hit “Lollipop.” The inspirational and emotional performance of the “The Anchor Holds” by Mark and Matt has become a signature number for the Rankin Brother’s and, once you have experienced their powerful and heartfelt performance of the song you will know why.

I can think of no better way to end a review on this show than by echoing the words of one person who saw the show recently and said, “Simply put, their show was great before, but even better this year. Way to go, Rankin Brothers and Rankinettes!” Yes indeed, “Way to Go,” what a great show.

For additional information or tickets for the Rankin Brothers Show or any of Branson’s other shows, attractions and activities or for lodging arrangements please contact the Branson Tourism Center (BTC), one of Branson’s largest and most respected vacation planning services. BTC can be reached by either calling their toll free number 1-800-785-1550 or through their website www.BransonTourismCenter.com.