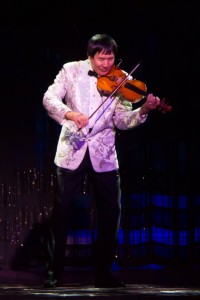 BRANSON, MO, June 3, 2013 – There’s a reason the Shoji Tabuchi Show is going into his 25th season of performing in Branson. Simply put, it’s because Shoji Tabuchi is a master at his craft, loves what he does, relates to his audience not only on a musical, but personal level, surrounds himself with some of the best musicians, singers and dancers in Branson and stars in a unique, colorful and exciting one of kind entertainment production.

Now I expected something special for Shoji’s 25th year, but was just blown away as the show, to paraphrase a page from “Star Trek,” “Goes boldly where no Shoji Tabuchi show has gone before.” Oh, it still features the amazing fiddle and violin playing of its star, great production, costuming, sound and lighting and a variety of music that covers everything from polkas, country, gospel, rock and roll to bluegrass, Texas Swing and more, but the 25th anniversary show, with about 90% of the show new, presents it in a fresh and almost evolutionary manner that makes an already great and unique entertainment experience even more so. My wife Lois, who has seen a number of Shoji Tabuchi shows since 1986, said, “This is the best one yet.”

The show’s first two “sets” established the tenor for the variety, quality and pace of the great entertainment that would follow throughout the show. Its opening set, with the full singing and dancing cast is, from costuming to its music, including “Thriller” and “Smooth Criminal,” themed on Michael Jackson. As Shoji Tabuchi is introduced and raises onto the stage, the production immediately and smoothly transitions into Shoji and the band playing a jazz segment including “Sweet Georgia Brown,” and “Tiger Rag,” a fiddle standard “Draggin’ The Bow,” and it’s a “It’s A Wonderful World.” 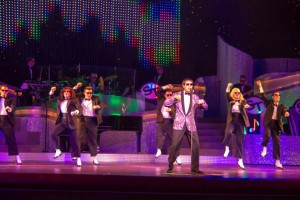 Whole cast number of "Gangnam Style" shows a whole different side of Shoji.

Then, as happens periodically throughout the entire show, the stage bursts into a flurry of color and action as the singers and dancers join Shoji and the band in a production number of Charlie Daniels classic “Boogie Woogie Fiddle Country Blues” featuring Shoji on the fiddle and Darrel Blevins on the guitar. The set was closed out by Shoji and Darrel doing a duet of the Brad Paisley song “Nervous Breakdown,” which was one of this writer’s favorite numbers in the show.

Realizing that my “favorite” numbers might not be yours, is very subjective and are selected from many other outstanding performances during the show, I typically mention a few from each show. In addition to “Nervous Breakdown,” Shoji’s solo performance of “How Great Thou Art” was as magnificent as it was inspirational; Christina Tabuchi’s poignant performance of “Not A Day Goes By” was simply beautiful; Allie Hutsell’s passionate and powerful rendition of “Ain’t No Grave” blew my socks off; the duet of Shoji and Sharlyn Smith on the mandolin, playing “Young Joe Clark,” Shoji’s version of mountain folk song “Old Joe Clark” had a special appeal and the all cast performance of South Korean rapper PSY’s “Gangnam Style,” including a “side” of Shoji we’ve never seen before, just cracked me up.”

The fiddle and violin playing of Shoji Tabuchi is legendary and needs no embellishment from this writer. From “Gangnam Style,” to classical, gospel to rock and roll, blue grass to Texas swing; whether it’s the “Orange Blossom Special” or “Danny Boy” a violin or fiddle, when Shoji Tabuchi plays it is a unique one of kind performance that will not soon be forgotten. 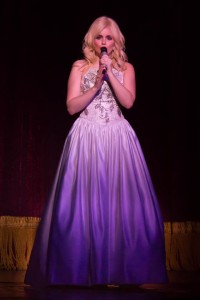 Christina Tabuchi performing "Not A Day Goes By."

The lead female vocalist, is his daughter, Christina Lingo Tabuchi, who is also the show’s co-dance captain. In addition to her performance of “Not A Day Goes By” mentioned above, she uses her considerable vocal talents on a variety of numbers throughout the show from covers such as Adele’s “Rollin In The Deep” and Bruno Mars “Locked Out Of Heaven” to Linda Ronstadt’s “The Only Mama That’ll Walk The Line” and others. Her duet performance with Shoji of one of her original songs, “Livin’ In Fear” from her album “The Originals,” was beautiful and touching.

An integral part of the overall experience of this show is the instrumentality and skill of the shows band and the vocal and dancing talents of its dancers and singers, all of which have been artfully woven and choreographed into this wonderfully entertaining production under the guidance of the show’s producer, Dorothy Tabuchi. The dancers and singers are Norvin Breeck, co-dance captain; Alicia Winking; Jonny Laughlin; Jeremy Sterling; Jere Holt; Allie Hutsell and Sharlyn Smith who is also an accomplished mandolin player. The band consists of Carl Hose, trombone and band leader; Mike Carrol, saxophone; William Green; percussion; Gregg Gray, piano, John Anderson, drums; Michael Waggoner, bass and Darrel Blevins, guitar.