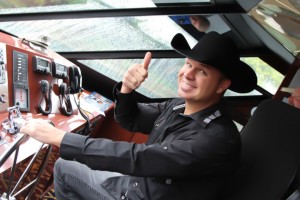 Clay Cooper "at the helm" of the Landing Princess .

BRANSON, MO, July 27, 2013 — “Just look at the way he relates to the passengers and the great time they are having with him,” said Annette Wood, Director of Group Sales for the Branson Tourism Center, one of the facilitators for Branson Tourism Center’s exclusive “Cruise With The Stars” event. She was referring to Branson star Clay Cooper, of the Clay Cooper’s Country Music Express show, as he interacted and shared with them on an individual basis during the Clay Cooper Cruise With The Stars event on July 26.

All of the passengers were part of an event combining two elements, seeing the Clay Cooper Country Music Express show and an exclusive VIP luncheon cruise with Cooper aboard Main Street Cruise Lines‘ 100 foot luxury yacht, Landing Princess. The VIP luncheon cruise with Cooper was available only as part of the Cruise With The Stars entertainment experience offered exclusively to Branson Tourism Center customers because of the special relationship it has with Clay Cooper’s County Music Express and Main Street Lake Cruises.

As each passenger boarded the Landing Princess they were greeted by Cooper who posed for pictures with them. After the cruise got underway, everyone had a chance to see Branson Landings spectacular “$7.5 million “Fountain Show” featuring the merging of music, fire, water, and light into an amazing and dazzling display of water fountains shooting 120-foot geysers and flame bursting from fire cannons all choreographed to light and music. They enjoyed a wonderful lunch as they cruised beautiful Lake Taneycomo. Fortunately, even though it was raining, the fog had lifted except for lingering wafts which added an additional element of surreal beauty to the scenery as the boat glided by.

As they ate and cruised Clay personally visited with each group and table. It was an honor watching him interact with the guests aboard the boat. When one sees his show they cannot help but be impressed with how he almost instantly established a rapport and relationship with his audience. It’s not something that is learned. One either has it or not and he has the gift. From the looks on the passengers faces and their comments it was obvious that the passengers felt that they had a special experience and one they would not soon forget.

Many asked for the schedule of future cruises because they wanted to plan to participate. Subject to change, the following Branson stars will be participating in Cruise With The Stars on the dates indicated:

As was the case with the Clay Cooper Cruise With The Stars, along with a unique view of beautiful Lake Taneycomo, Branson Landing and spectacular Ozark vistas each VIP cruise will include lunch and an unparalleled chance to interact with the star(s) on the cruise. This includes opportunities for photos, autographs and a unique up close and personal experience that is available only to those who have taken advantage of the exclusive offer and purchased Cruise With The Stars tickets.