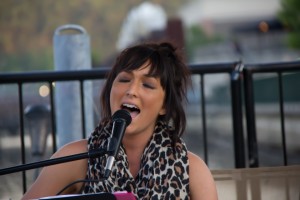 BRANSON, Mo., October 15, 2013 – Even after having lived in Branson for over 27 years the amount of musical talent in this little town still amazes me. Most will recognize the primary stars in Branson’s shows, but there is hidden talent all over Branson performing other jobs and doing other things waiting for opportunity to knock. It might be your server, a nurse, a high school class mate or, as is the subject of this article, the person selling you a ticket to a Branson attraction such as a sightseeing or dinner cruise aboard one of Main Street Lakes Cruises‘ boats, the river boat replica Lake Queen or the 100 foot luxury yacht Landing Princess.

Some of this talent performs in Branson shows, some want to be in Branson shows and others like singer songwriter Tessa Kate, an “Office Lead” at Main Street Lake Cruises “by day” and a singer songwriter “by night” just want to perfect their craft in a non-show environment, perform somewhere, be themselves and be in a position to take advantage of any career boosting opportunity that presents itself.

During a recent interview, just prior to starting her one person gig at Main Street Marina’s Paddlewheel, a unique floating restaurant and pub just off the Branson Landing Boardwalk, Tessa pointed out that her mother said, “I started singing to the beat of a washing machine before I could talk.” When asked what the primary inspiration was that caused her to develop her talent she said, “Can’t say that I ever developed it. I’ve always loved to sing and don’t remember ever not singing.” She learned to play the guitar when she was about 14 because her dad, although not professionally, played the guitar and sang her whole life and she wanted to learn to play the guitar so she could play with him.

Born in a log cabin in Western Grove, Arkansas in 1988 Tessa has been singing in church and talent shows since she was seven years old, has never worked as a full time professional singer and has always had a “full time” time “day” job, singing and writing songs on a part time basis. She started performing professionally about seven years ago at a coffee shop in Harrison, Arkansas singing songs that she had written and has performed various gigs since then, some with bands and some solo using a mixture of “cover songs” and her own songs.

As an “Office Lead” for Main Street Cruise Lines Tessa sells tickets, helps with customer service and substitutes as a crew member on the boats when needed. When asked how she got the gig at The Paddlewheel she said, “After opening The Paddlewheel here at Main Street Marina they said they wanted to have music entertainment at night so I threw myself out there and told them that I play and sing. Even though the owners and management of Main Street Marina and The Paddlewheel are the same and she knew them she said, “My audition for them was the scariest ‘show’ I ever did. I’d rather play for a hundred people than one on one for someone that I know.”

Obviously, the audition went well because, shortly after our interview she began her performance at The Paddlewheel where she is scheduled to perform for three hours each Thursday evening and for special events. As I sat there and listened to this very special young lady sing the John Denver classic, “Leaving On A Jet Plane” and reflected on our interview I thought, “What a beautiful voice and sweet spirit. She’s the real deal and when ‘opportunity’ comes knocking at her door she’s going to open the door and embrace it.”