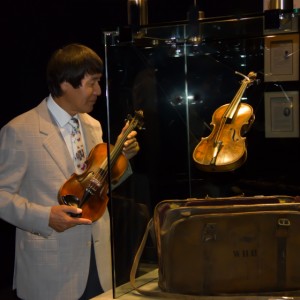 Shoji Tabuchi viewing the Titanic Violin while it was on display in Branson.

BRANSON, Mo., October 21, 2013 – The “Titanic Violin,” which was on display at the Branson Titanic Museum Attraction during the month of August and believed to the long lost violin that Titanic’s bandmaster, Wallace Hartley played as the R.M.S. Titanic sank during the early morning hours of April 15, 1912 after hitting an iceberg, was sold at auction on Oct. 19 for $1.45 million. The amount is a record setting price for a piece of Titanic memorabilia, easily eclipsing its nearest “competitor,” an actual plan of the Titanic used at the admiralty hearings on the sinking in 1912, by a multiple of more than four.

Although there were many skeptics as to the authenticity when its discovery was originally made public in 2006 years of testing and authenticating seems to have carried the day. While the violin was on display at the Titanic Museum Attraction in Branson, Craig Sopin, one of the largest private collectors of Titanic artifacts and memorabilia, who was initially one of the violins biggest skeptics was asked if he believed the violin was authentic. He replied, “I am absolutely convinced.” He said that he changed his mind based on his own investigation, the extensive physical testing that has been done on the violin and case and provenance evidence tracing the violin back to the Titanic.

The auction was held at Henry Aldridge and Son in Wiltshire, England who are specialists in auctioning Titanic memorabilia. Prior to the auction it was estimated that the violin would sell in the $322,000 to $488,000 range, but according to reports, after starting out at about $80,000 the bidding quickly rose to the point where, at the end, there were only two telephone bidders going head to head. The name of the victorious bidder was not announced.