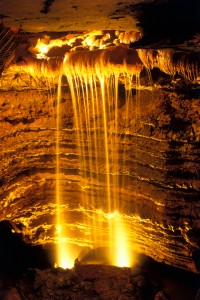 One of the beautiful and unique views from inside Marvel Cave.

BRANSON, Mo., December 29, 2013 – “Branson is steeped in the history and heritage of the Ozarks,” said Tammy Johnson, the Director of Operations for the Branson Tourism Center. “In fact, Branson’s now famous tourism industry got its first major push from a book based on that very thing when Harold Bell Wright published the novel ‘The Shepherd of the Hills’ in 1907.”

Even before that however, Branson’s oldest attraction, “Marble Cave,” operated by the Lynch family, had been providing tourists with an opportunity to go deep beneath the Ozark Mountains on cave tours since about 1894. The cave is now called “Marvel Cave,” is a National Natural Landmark and offers “free”offers, but interestingly, each year hundreds of thousands rush right past its entrance seemingly without noticing or, if they do, without a second thought.

There’s a pretty good reason for that however, because the cave is actually located just inside the main entrance to Silver Dollar City, the international award winning 1880s styled theme park that is easily Branson’s most popular attraction. From a historical perspective, Silver Dollar City is also Branson’s first and longest continuously operated attraction because it includes “Marvel Cave” which was continuously operated by the Lynch family for 50 years prior to the Herschend family leasing it in 1950. In 1960 they started “Silver Dollar City” at the entrance of the cave as a way to entertain visitors waiting for their cave tour and as some say, “The rest is history.”

A tour of Marble Cave is one of the many activities included with an admission ticket to Silver Dollar City and provides those taking the tour a unique and interesting opportunity to experience something that is a special part of Ozark Mountain history and, most certainly, something they will not see in any other theme park. Weather permitting, tours depart every 30 minutes, take about 60 minutes and include a unique exit, from far below the surface, via an inclined tram built by the Herschend family prior to the opening of Silver Dollar City.

Branson Tourism Center’s Johnson invites anyone wanting more information about “Marvel Cave” and “Silver Dollar City or tickets for any of Branson’s shows and attractions to contact the Branson Tourism Center by calling 1-800-785-1550 and talk with one of its trained Branson based Travel Planners.