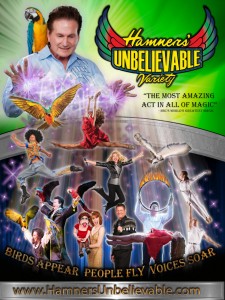 The excitement and action of the show as reflected in its poster.

“No pun intended, but the talent and variety in this show is simply ‘unbelievable,'” said internationally famous illusionist Dave Hamner recently during a break from the exhausting grind of producing one of Branson’s newest shows, the Hamners’ Unbelievable Variety Show, which will premiere at the “Hamner Variety Theatre,” in Branson, Missouri on March 11, 2014. “This show presents Branson audiences with a unique blend of acts, color and excitement they have never seen in Branson before where ‘birds appear, people fly, and voices soar’ in a truly magical combination of entertainment from beginning to end,” he added.

Denise Hamner, the other half of the incredible magical duo known as “The Hamners,” could scarce contain her excitement when talking about the various elements and acts in the show and how they will all flow together providing audiences of all ages with an equally entertaining experience from the opening to the final curtain. She said, “Our goal is to have the audience sitting on the edge of their seats anticipating what is coming next as the show seamlessly transitions from one exciting act to another and, when it’s all over, wanting to come back because they want to make sure they haven’t missed anything.

The interview was taking place while the work in getting the show produced continued around us. Noted Branson dancer, AJ Heard, the shows choreographer and one of the dancers in the show said, “I’m super excited about all the talent and variety that will be blended together in this amazing new multidimensional experience.” What was really neat was that when she asked her young daughter, Cydney, who was there keeping an eye on mom, based on what she knew about the show so far, what she thought about it; she immediately responded, “Awesome!”

The featured acts in the show include world renowned illusionists Dave & Denise Hamner who will perform a variety of illusions including “their one of a kind act” in which they produce several beautiful Macaws and Cockatoos that appear amid flying cards, flaming swords, falling coins and jewels along with an incredible flight out over the audience and other original illusions such as “Stargate,” “The Lightning Levitation,” “Vertigo: The Fall of Death” and an absolutely magical “Veterans Finale.”

As exciting and unbelievable as the Hamner’s magic is on hits own, the show will become”unbelievably” magical when that magic is seamlessly blended in and highlighted with the other amazing acts in the show. This includes impressionist Jeff Brandt, considered one of the top singing impressionists in the country; Vadim & Mariya Serykh, a Russian father and daughter adagio team performing hand balancing, acrobatics, and high flying aerial acrobatics; the vocal talents of Tamra Tinoco who has performed all over the world and in 45 different states with artists such as Lee Greenwood, Vince Gill and others as well as producing and staring in Branson’s Magnificent Seven show and the ventriloquism of Brenda Hahne and her cast of characters who have been entertaining hundreds of family audiences across the country and on cruise ships for over 15 years.

In the final weeks of preparing for their premier Denise said that things are hectic and the weather sure isn’t helping, but that they are excited about the new show and eagerly anticipating opening night. Based on what I have seen the Hamners do in the past, what I have heard and seen so far about the show and its acts and, of course, with Cydney’s “Awesome,” I can’t wait to see the Hamners’ Unbelievable Variety Show.