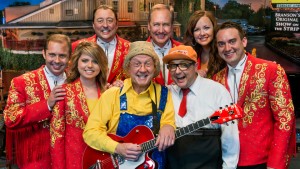 The Presley Family is ready for the 2014 Branson season.

After this winter we are all ready for spring. Here in Branson our Ozark Spring, for as long as I can remember, has been signaled by three things that generally happen before the official first day of spring. They happen pretty close together and two out of the three are not weather related, but it is generally considered spring in Branson when these three things have happened:

1. Presleys’ Country Music Jubilee has its first performance of the year – This pioneering Branson paradigm show has been a harbinger of spring in the Ozarks for over 45 years ever since the Presley family built the very first theatre on what is now the “Branson Strip.” Presleys’ is a wonderful blend of “patented comedy” and music that has been entertaining Branson audiences every season since 1967 with new comedy, music and costuming that brings the same excitement and freshness to the Branson show scene as Mother Nature brings to our beautiful Ozark Mountains each spring. Their first performance for the 2014 season is on March 7.

2. Silver Dollar City’s Opening – The opening of Branson’s oldest and most popular paid attraction, the award winning 1880s styled theme park, Silver Dollar City each year is not only a sure sign that it’s Spring has come to the Ozarks, but that Branson’s tourist season is getting ready to blossom. In addition to its six world class festivals, starting with World-Fest, Apr.6 through May 5, the park has a wide selection of rides the whole family can enjoy such as Powder Keg, Fire in the Hole, The Giant Swing, Wildfire, and Outlaw Run as well as the “Grand Exposition” with family friendly rides like the Magnificent Wave Carousel, Mighty Galleon, Electro Spin Royal Tea Party, Wings of Wonder, The Ladybugs and Happy Frogs. As great and exciting as the rides and festivals are, they are just part of the Silver Dollar City experience. There are shows and activities, many festival specific, throughout the whole park and dozens of practicing craftsmen from wood carvers to candle makers and glass blowers demonstrating their craft. Silver Dollar City starts its 2014 season on March 14.

3. Budding of the Redbuds – As I have fished Lake Taneycomo each year over the past three decades an early and sure sign of spring is the beautiful sight of the Redbuds breaking out along the banks. They were soon followed in concert by a spring palette of color as the Dogwoods and others burst forth, but always it seems the Redbuds lead the way with their simple elegance signaling the freshness and excitement of another Ozark Spring.

“The Spring colors along Lake Taneycomo and over our Ozark Hills is a beautiful once a year show that proclaims in elegant style the uniqueness of spring in the Ozarks and Branson,” said Annette Wood, Director of Sales and Marketing, Branson Tourism Center. “Why not plan to experience it yourself while on Spring Break? There is absolutely nothing in the world like spring in Branson,” she added.