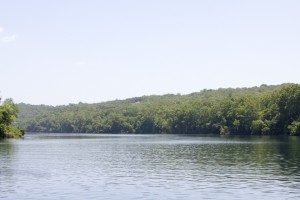 One of Lake Taneycomo’s scenic vistas.

1. Lake Taneycomo’s Relationship to Branson Landing: It makes up the eastern boarder of the city of Branson and is a featured integral part of Branson Landing with a 1.5 mile board walk running the entire length of The Landing.

2. Branson Landing: The largest development in Branson’s history, Branson Landing opened on May 25, 2006. It is a 95-acre, $435 million public/private multiuse project that spans 1.5 miles of waterfront on Lake Taneycomo, and is conveniently located adjacent to historic downtown Branson. It’s combination of luxury condos and over 120 retail stores and restaurants including “eclectic shops, national retailers, fine dining, intimate cafes and nightspots,” Main Street Lake Cruises, two “floating restaurants and the spectacular free Branson Landing Fountains makes it one of the most popular attractions in Branson.

3. Branson Landing Fountains: Located in the heart of Branson Landing on the shoreline of Lake Taneycomo, the fountains are the centerpiece of a $7.5 million spectacular water attraction featuring the first-ever merging of water, fire, light and music with water fountains shooting 120-foot geysers into the air and “fire cannons,” all choreographed to lights and music.

4. Lake Taneycomo Formation & Powersite Dam: “Lake Taneycomo” was formed in 1913with the completion of the 1200 foot long 70 foot tall “Powersite Dam,” across the White River at a cost of $3.2 Million. Prior to that time the “White River” ran unimpeded from its point of origin, in the Boston Mountains, 734 miles to the Mississippi River.

6. Lake Taneycomo Info: Lake Taneycomo is 23 miles long running from White River Mile Marker 506.1 to 528.8 at the foot of Table Rock Dam. It has over 52 miles of shore line and covers over 2050 surface acres.

7. Originally a Warm Water Lake: When originally formed Lake Taneycomo was a “warm water” lake which was ideal for bass and crappie fishing and other aquatic activities like swimming and waterskiing. The quite little town of Rockaway Beach, located on one of the widest portions of the Lake, soon became one of the premier vacation destinations in the Ozarks, much more so than Branson at that time, but all of that dramatically changed with the completion of the Table Rock Dam and the formation of Table Rock Lake in 1959

8. Impact of Table Rock’s Electrical Generation on Lake Taneycomo: Primarily constructed as part of the flood control system on the White River and for the generation of hydroelectric power, it is the day to day generation of electricity through Table Rock Dam’s four 50 megawatt generators that impacts Lake Taneycomo the most. The water that is used to generate the electricity is drawn from Table Rock Lake at a depth of about 140 feet which, without sunlight penetration, has a constant temperature of about 45 degrees F year round. This results in an average temperature of about 48 degree Ftemperature near Table Rock Dam and changed a warm water lake into a cold water lake virtually overnight.

9. Lake Taneycomo’s “River Lake” Characteristics: “Lake Taneycomo” is an artificial “lake” in terms of being “a large body of impounded water surrounded by land except for the waters flowing into and out of it.” However, it still retains many of the characteristics of its “White River” heritage such as its extremely narrow shore line and current. Although perhaps not apparent in the deeper water lower half of the lake, its current, depth and average 48 degree temperature are controlled day to day by hydroelectric discharges through the dam making it, “for all practical purposes, a deep, cold, fast-running river… dependent on the number of turbines generating and the volume of discharge from each.”

10. Bass to Trout: The Missouri Department of Conservation, anticipating that the colder temperatures of Lake Taneycomo caused by the generation of hydroelectric power would decimate the warm water species of fish such as bass and crappie in the main lake, built the Shepherd of the Hills Trout Hatchery at the foot of, and in conjunction with the building of, Table Rock Dam. This decision, and the introduction of a small fresh water shrimp food supply, has made Lake Taneycomo one of the finest trout fisheries in the nation. Currently about 700,000 thousand Rainbow and 10,000 Brown Trout per year are stocked into the Lake.