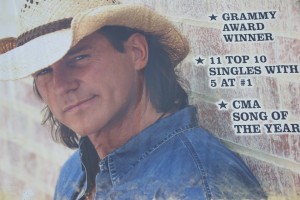 Grammy Award Winner, Billy Dean, an ACM “New Male Vocalist of the Year” with 11 Top Ten Hits and over 20 hit singles, is currently performing his own show, Billy Dean Live in Branson. He came to Branson for his first extended stay performance last November and December and liked it so much he came back with his own show for the 2014 season. Dean shares his perspective on what brought him to Branson and much more in this exclusive “Up Close and Personal” interview.

“Branson Up Close and Personal,” is a service of the Branson Tourism Center, one of Branson’s largest and most respected vacation planning services, and is intended to provide readers with an up close and personal look at a Branson star or personality. The interview with Billy Dean, (BD) uses a “Question and Answer” format with the interviewing being done for the Branson Tourism Center (BTC) by Gary J. Groman, a 28 year resident of the Branson area, local columnist and free-lance writer.

BTC: What is your first memory of Branson?
BD: Although I had appeared briefly in Branson prior to last year, my real first impression of Branson was this last November and December when I got to stay for a little bit and came to appreciate that all of the qualities and values that made America great are alive and celebrated here in Branson and I have not seen that anywhere else.

BTC: What first brought you to Branson as a performer?
BD: Years ago, performing at the Grand Palace, opening for Kenny Rogers.

BTC: What brought you back?
BD: Performing the lead in Kenny Rogers’ “Toy Shoppe” last November and December.

BTC: What made you decide to open your own Branson show for the 2014 season?
BD: When I realized that I could do bigger, better and more quality shows if I did not have to travel. I would also be able to present a show with lights, video screens, staging, crew, sound and everything else that would cost an enormous amount of money to do on the road.

BTC: Do you live in Branson now?
BD: I have never lived anywhere. I have traveled my entire life, but I do have a little farm called “Dean Acres” in Nashville and a condo here in Branson. We are basing our entire operation, touring and everything, out of Branson right now.

BTC: What do you like most about living in Branson?
BD: The quality of life. I’m a lot healthier being here, keeping off of planes and tour busses. It’s better for my voice and I am more productive because I am in one place and not traveling. It’s just a healthier lifestyle than traveling on the road.

BTC: What is different about the Billy Dean Live show and any other Branson show?
BD: I am not doing other peoples songs. I am doing a high energy fun country music concert performing, for the most part, my own music, featuring songs I have written and performed including “Somewhere My Broken Heart,” “Tryn’ To Hide A Fire in The Dark,” “Billy the Kid, “Let Them Be Little” and cover songs such as “Thank God I’m A Country Boy,” that were hits for me.. Last year Tony Orlando said that if I wanted to be successful in Branson I needed a hot band and to fill the show full of music. That’s what I have, a hot band called the “Steel Horses” and lots of “music per square foot.”

BTC: Why should I plan to see the Billy Dean Live show while in Branson?
BD What I do best is present the artistry of song writing and storytelling, which is to me the foundation of country music, in a high energy, fun filled and extremely entertaining concert format. If you like country music you will love this show as much as I love doing it.

BTC: If a ten year old child asked the same question the answer would be?
BD: I promise that ten year old that they will not fall asleep in my show.

BTC: What is your personal favorite song to sing?
BD: “Let Them Be Little,” a song I wrote for my kids when they were little. It had been six years since I had a hit and everyone said that I was finished and done. The message and power of that song touches people, especially parents on a deep level. That song went to number seven on the chart and stayed in the top ten for ten weeks.

BTC: What part of the show do you personally like the best?
BD: I do a really classic country Merle Haggard song, “You Take Me For Granted” that I love with just me and the steel guitar. It’s the old school country that I grew up listening to that you don’t hear much anymore and it’s a special moment with the audience just me, the guitar and the steel player.

BTC: Where is home now?
BD: I still live in Nashville, on a little farm that I have called “Dean Acres as well as Branson”

BTC: Family?
BD: I have a son who is in college and a daughter who is in nursing school.

BTC: What got you started entertaining?
BD: My earliest memory was hanging out singing with my dad’s band “Country Rocks”

BTC: How old were you when you first started?
BD: I started playing guitar and singing when I was in the second grade. It was something I grew up with.

BTC: How long have you been performing professionally?
BD: I was on Ed McMahon’s “Star Search” in 1988 which led to a lot of “session work” and my start in Nashville.

BTC: What was your big break?

BD: When my first single “Only Here For A Little While,” from my first album [Young Man] peaked at number 3 and spent 22 weeks on the “Hot Country Songs charts and my second single, “Somewhere My Broken Heart,” went up the charts and I was awarded the “ACM Top New Male Vocalist of the Year Award” for 1991.

BTC: What has been your biggest inspiration in your career?
BD: Being able to work with an icon like Kenny Rogers.

BTC: What’s your favorite thing to do in Branson when you are not performing?
BD: I like the lakes and love to go to Branson shows. Believe it or not, I’m the biggest tourist in the world.

BTC: If you could perform or meet with any entertainer/person (living or deceased) who would it be and why?

BD: I would have loved to have been in a circle singing some harmony with Elvis when he was singing gospel.

BTC: Do you have some little known fact about yourself that you could share with our readers?
BD: “Billy’s” not my name. My name is “William Harold Dean” and I grew up as “Harold Dean.” I never liked the name Harold, but I was named after one of my dad’s brothers who was killed in WW II. My dad’s name was “Billy” and he wanted a career in music, but because of raising a family, didn’t pursue it. After his death, as my career was developing, I changed my name to “Billy.” I can’t tell you how often since then, when I have seen the name “Billy Dean” on a marquee, that I think of my old man and say, “We made it together.”

BTC: What is the funniest thing that has happened to you in front of an audience?
BD: We were at a big outdoor festival in Wheeling, West Virginia and this girl got in a big fight with her boyfriend while I was performing. It kind of stopped the show and, as they yelled at each other, she chased him to into a “porta potti.” At that point I started singing “Somewhere My Broken Heart,” she looked up at me, turned back to the porta potti, and started shaking it until it fell and then rolled it down a little hill.

For additional information or tickets for the Billy Dean Live show please contact the Branson Tourism Center, one of Branson’s largest and most respected vacation planning services by calling 1-800-785-1550 .