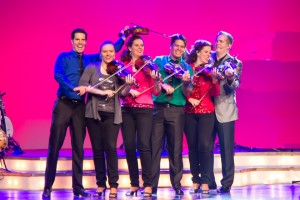 As The Duttons Show was drawing to a close on the afternoon of May 14th, I experienced, up close and personal, just how special this show and the family presenting it are as they performed their theme song, “You Can Count On Me.” Don’t know exactly what caused it, but as they performed and each of their families phased into the performance, the reality of the song and what I felt it meant to their commitment to each other and the type and quality of what I had experienced throughout the whole show touched my heart and brought tears to an old man’s eyes.

Like perhaps no other show in Branson, this show is a celebration of family as they share their family, and its considerable talents, with your family in one of the most entertaining family music shows in Branson. This show has been specifically designed, produced and presented, from beginning to end, to be as much fun for every member of the audience as it is for every member of the family that is performing it.

The core of the show, around which this fantastic entertainment experience is built, is the Dutton siblings Abby, Amy, Benjamin, Jonathan and Timothy; Timothy’s wife Judith; drummer Rob Wilson and the considerable instrumental and vocal talents of granddaughter Jessica. The instrumental and vocal talents of this core group alone is absolutely amazing. However, when coupled with performances by other family members, including some of the families 25 other grandchildren, and the artful and professional way they are seamlessly woven into the performances of the core performers, the result is a show that has more simultaneous moments of entertainment in it for every member of the family, adults as well as children, than any other music show in Branson. 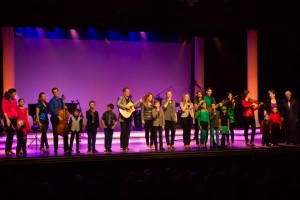 The Duttons performing their inspirational and moving rendition of “You Can Count On Me.”

To me that’s an important aspect of this show. I am not aware of a show in Branson that is not suitable for children in terms of their content, but based on my personal experience, I can say that, with few exceptions, the vast majority of Branson’s music shows have not been designed with a consistent flow of material and performers that will appeal to the children in the audience as well as their parents, grandparents and other adults. This simultaneous ability to consistently entertain and appeal to both adults and children, on a peer to peer level, is an inherent magical part of this unique special show.

From its opening number, a full cast performance of “Uncle Penn,” to their finale, “Boil Them Cabbage Down,” it is obvious why the Duttons made it to the top ten on the NBC prime time hit show, “America’s Got Talent.” The talent of the Dutton siblings is the foundation upon which this show is built and what a foundation it is. Whether it’s the fiddle and violin playing of Amy or Abby, the dancing and humor of Benjamin, the playing of Jonathan, the multi-instrumentality and singing of Timothy the keyboard playing and singing of Judith or, as is often the case, a variation or mixture of any of the above, you can count on an experience filled with great music, fun, humor, entertainment and a special warmth.

One of my favorite numbers was “Cotton Eyed Joe.” It was musically performed beautifully; but, as they do so often during the show, it was “Duttonized” with their remarkable instrumental skill, a “black light” segment featuring some of the grandchildren and a demonstration of the superb dancing skill of Benjamin. The result was a unique and exciting performance that was as wonderful and colorful to watch as it was to hear.

This show has one of the most touching and sincere Veterans segments of any show in Branson, a unique dueling performance of the fiddle classic “Orange Blossom Special,” and a classical segment featuring an prelude by Timothy playing an introduction of “Capricho Arabe” on the classical guitar leading into Amy playing a combination of Vivaldi’s “Four Seasons Summer Movement” with a touch of Vitoria Monte’s “Csárdás” that is spectacular. With a show filled with so many highlights, it’s hard to pick a favorite, and I’m sure yours will be different than mine, but here are my two favorites.

I loved the beginning of the second half as Timothy, on the guitar and Amy on the violin started playing “Viva La Vida.” As the number continued more family members were slowly added playing violins then, in a similar manner they withdrew leaving the original two. It was a simple beautiful moment of musical eloquence. Obviously, I also loved their performance of “You Can Count On Me” because, to me, it captures what makes the Duttons so special, their commitment to each other, entertaining their audience and sharing their family with us. Ok, I just have to add a third, I really enjoyed the Polynesian number “Tutuki,” performed by Bella Dutton, Jonathan’s wife, who is from “Soma;” her daughters and Rachel and Jessica. I would be remiss if I did not comment on the excellent job that Jessica Dutton does as she performs with her aunts and uncles. She is an accomplished violinist and, like her younger sister Rachel, is blessed with the vocal talents of her mom and dad, Tim and Judith Dutton. Young Master Timmy Dutton gave an excellent performance of “Danke Shoen.” 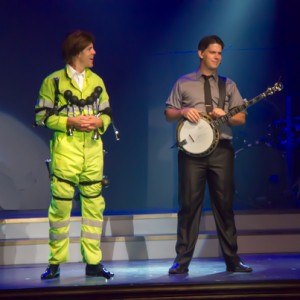 Cousin Julio, who looks a lot like Benjamin, trying to “horn” in on Jonathan’s number.

Some who have seen the show, are probably wondering how Cousin Julio is doing. He’s doing fine and showed up trying to “horn” in for an audition for the show after being rejected last year. It was, from both a musical and humorous point of view a “hoot” and this time he got the job; well sort of, but you’ll see what I mean during the second half of the show.

By now you are probably asking, “Is there nothing in this show that was not a highlight?” Not much, not much at all. Previously I wrote, “From rock and roll to blue grass and country this show has a variety of music that has something for everyone. It’s not the shows content alone however, that makes the show so special. It’s how they present it, with that unique Dutton talent, instrumentality, flair, showmanship and innate ability to instill that warm directly ‘from our family’ to ‘you and your family’ feeling in its audience members, that makes this show the unique, special and wonderful Branson entertainment event that it is.” All I can say after seeing their show on May 14, is, “Ditto.”

For tickets or information for The Duttons Show or for any of Branson’s other shows and attractions or for lodging arrangements please feel free to contact the Branson Tourism Center, one of Branson’s largest and most respected vacation planning services by calling 1-800-785-1550 or through its website, www.BransonTourismCenter.com.