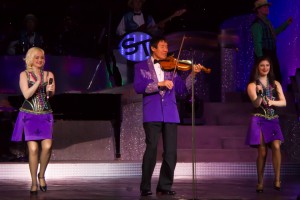 Christina Tabuchi, right, Shoji Tabuchi and Sharlyn Smith performing during the “Dixieland “segment of the show.

“Is that Shoji Tabuchi playing Led Zeppelin’s ‘Kashmir?'” It absolutely is and to kick off his 2014 show no less! Performing for his 26th season in Branson, Shoji’s 2014 show just might be his best show ever and clearly demonstrates why he, and his show, have not only remained one of Branson’s premier entertainment experiences for so long, but are poised to continue that tradition well into the future.

I have seen dozens of great Shoji Tabuchi shows over the last 28 years great, but the one I saw on May 21st is like no other. All the hallmarks that the Shoji Tabuchi show is known for, its wide range of music; great dancing, singing and an orchestra filled with extremely talented multi instrumental musicians; colorful costuming, lighting, lasers, exciting and varied sets along with a seamless flow from one segment to another, are there in force. Although certainly an intangible it is the way that it all seems to come together, with an infectious charismatic blend of energy, excitement and the ability of the cast to convey the feeling to the audience that they are just having fun, that makes this year’s show so special.

One lady, speaking of Shoji’s playing said, “It’s not just that he is playing music that brings back some great memories, but the way he plays them just makes them so much more special.” If I were going to pick three of my favorites that Shoji played, from among many, illustrating that point I would pick “Love Me Tender,” “How Great Thou Art,” and “Through The Eyes of Love.” Whether it’s the violin or the fiddle, “Kashmir” or his “patented” version of the “Orange Blossom” there is something special and magic when Shoji plays. 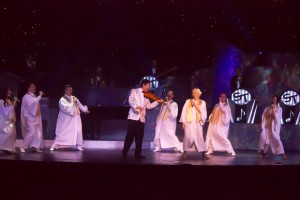 The singer/dancers with Shoji and Christina during a stirring gospel number.

The singer/dancers are multi-talented and add and exciting dynamic to the show not only with their singing and dancing, but in other areas. The opening of the second half with the Taiko drums, from Shoji’s native Japan is but one example, as ten drummers play three different drums including the large “Odaiko” in a unique one of a kind performance. As part of the segment Shoji plays the “Shamisen,” a three string instrument that is the Japanese equivalent of the banjo and does a duet of, what I believe was “Sukiyaki,” with his daughter Christina. Sharlyn Smith, one of the singer/dancers plays the mandolin during a beautiful bluegrass duet with Shoji.

The lead female vocalist for the show is the talented Christina Lingo Tabuchi, who is also the co dance captain and Shoji’s daughter. She does an excellent job performing a variety of original and cover vocals throughout the show. My favorites were her version of “”Boondocks” and an original song she recorded in Nashville, “Breaking It Down.”

Shoji’s ability to relate to his audience, whether playing, telling the story of how he came to be an American citizen, got his “southern accent” or anyone of a variety of other anecdotes sprinkled throughout the show is an inherent part of the whole experience. As I wrote last year and will again reiterate, “Simply put, Shoji Tabuchi is a master at his craft, loves what he does, relates to his audience not only on a musical, but personal level, surrounds himself with some of the best musicians, singers and dancers in Branson and stars in a unique, colorful and exciting one of kind entertainment production.” I would add one thing for this year’s show, hold on to your seat from the moment the curtain does up because this year it’s on steroids!

For more information or tickets for the Shoji Tabuchi Show please contact the Branson Tourism Center, one of Branson’s largest and most respected vacation planning services by calling 1-800-785-1550 or through its website, www.BransonTourismCenter.com