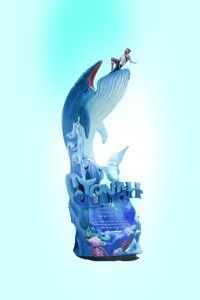 “Jonah brings biblical story of God’s reluctant prophet  to life in a “whale” of an entertainment experience.

Living in Branson for 28 years and writing about it for most of those years has put me in a position to see all of the spectacular Sight and Sound Branson shows, “Noah, the Musical,” “Miracle of Christmas,” and “Joseph.” When I went to see their new Branson production, Jonah, on May 29 I expected to see a show with great music, vocals, spectacular sets and costuming presented as only Sight and Sound can do it. Well folks I got that and a “whale” of a lot more. OK so it was a “big fish,” but I like the term “whale” that is commonly used when people talk about the biblical story of “Jonah.”

As great as the special effects and scenery have been in their other productions, the special effects and scenery in Jonah are just about unbelievable. The action scenes of the ship breaking up; Jonah flying through the air, particularly as he departs the belly of the whale; the set of Jonah in the belly of the whale and the underwater scene with the great whale are simply magnificent and something no one has ever come close to seeing on a Branson stage. 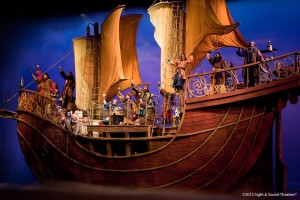 30,000 pound ship “sails” the stage and breaks up during the storm.

The ship alone took two years to build, weighs 30,000 pounds, sails “the seas on the stage” with its crew and starts to breaks up right before your eyes as the storm plummets it about. Then, after, they throw Jonah overboard, the storm abates and the stars again sparkle in the background. Meanwhile Jonah sinks into the depth of the sea setting the stage for the visual highlight of Jonah, the underwater segment with the great whale.

The audience is immersed, in a literal sense, in a spectacular underwater environment as beautiful fish swim about, Jelly Fish come down from the ceilings and the great whale comes out of the darkness and swims slowly and gracefully out over the audience through a beautiful underwater world and then, returns to swallow Jonah. Parents need not worry, the actual swallowing of Jonah by the whale is not seen. One minute the whale is swimming toward him and the next, there is a set with Jonah in the belly of the whale. Jonah’s exit from the belly of the whale was a “high flying” experience that delighted the audience.

As a general rule, with Sight and Sound shows you want to be in your seats when the show starts and immediately after intermission. If you are not, there is a chance you will not be admitted into the auditorium until it can be done safely because of the fact that animals and cast members use the aisles. This is particularly the case right after intermission when the big underwater scene takes place.

This show has it all, drama; original music produced specifically for Jonah and performed by Prague Symphony Orchestra; great vocals sung live on stage by the shows cast; 30 live animals including sheep, highlander cattle, camels, alpacas, horses, llamas, dogs, birds and miniature donkeys, and great sound, special effects, lighting and spectacular sets. The energy and talent of the shows cast of 41 performers brings the story of “Jonah,” and how he tried to run from what he knew God wanted him to do, to life in a very special and entertaining way.

It’s hard to imagine a show with a greater appeal and spectacle than Jonah as it brings to life and illustrates one of the greatest biblical stories of all time about the lesson one of God’s own prophets had to learn about His mercy and love for us, even as he tried to run from it. The magnificent and spectacular way the story comes to life in Jonah is unlike anything that most people will every experience live on stage, a pure joy to experience and something is that special type of entertainment that every member of the family will enjoy and remember for a lifetime.