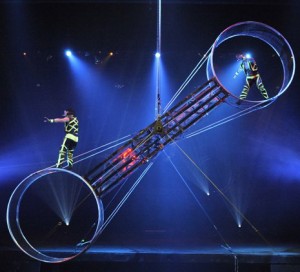 The most daring stunt ever performed on a Branson stage. The “Wheel of Death” will have you sitting on the edge of your seat.

Over the past 28 years I have seen just about every “Cirque” type of show that has come to Branson. On May 31st I saw Le Grand Cirque, the most exciting, amazing, entertaining and daring cirque show that I have ever seen in Branson. In fact, I have never seen a show in Branson that combines music, dancing, comedy, amazing acrobatics and extreme stunts into a “sit on the edge of your seat excitement” entertainment experience like “Le Grand Cirque” does.

The full cast opening featuring dancing and music performed by colorfully dressed “clowns” is a fast paced number filled with neat acrobatics and moves that blends into one of best “hula hoop” acts I have ever seen. Young Noemi Lee España does amazing things with hula hoops that I have never seen before. Oh I have seen plenty of hula hoop acts and people twirl ten hoops before but I have never seen a hula hoop act like this and it’s just the first act.

For reasons that will be explained in a moment, this is as good a time as any to point out the cast of the show and what they do: 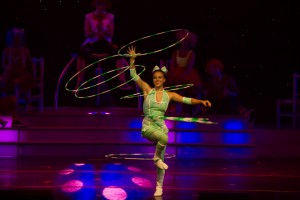 You will note that the name “”España” appears quite a bit. It’s amazing that all this talent is one family. In addition to the talent, the different acts performed by different family member from “mom and dad” down to the kids relates so well to the audience, especially the children. How well? This comment from a review of this show by “zrahnoelle” on May 28 on Branson’s largest message board, “1Branson.com” said, “We saw La Grand Cirque at Kings Castle Theatre last night. Ages 7 to 67 and we all loved it! Several very dangerous acts had us on the edge of our seats and my 11 year old said she was so scared they would fall that her tummy hurt!” In my opinion this is one of very few Branson shows that will entertain children and adults simultaneously from the beginning to the end of the show.

There is just the right mixture of audience interaction and humor with the Mime mixed with music and dancing as the show swiftly and seamlessly moves from one act to another in a colorful and entertaining manner. One example is with the introduction to the aerial hoop act when a box appears on the stage and colorfully dressed characters come out until Vivien España  comes out of the box and rises gracefully into the air to perform her beautiful Aerial Hoop act. The “Black Light” routine leading into the “Wheel of Death” is another example.

The “Wheel of Death” is one of the most extreme stunts I have ever seen performed on any stage, Branson or anywhere else. Noe España and dilson De Paula Fernandes each walk in a “wheel” at one end of a pendulum that is swinging the two wheels in a full 360 degree circle that goes from the stage to the top of the theatre over 30 feet in the air. It scary enough when both of them are walking inside the two wheels as the pendulum speeds up, but it approaches insanity when one of them gets on top of the revolving wheel and performs. What an act and we haven’t mentioned the two motorcyclists performing in the “Globe of Death” as they zoom around not only each other, but, Noemi Lee España standing inside the “Globe.”

Even acts you have seen before take on new life and excitement in this show. Young Elan Alex España performs with the Diabolo “Chinese YoYo.) What he does with one is amazing, but when he goes to two and three he knocks it out of the park. From music, colorful costuming, excitement, grace beauty and danger, L”e Grand Cirque “has it all and is truly “Amazing Beyond Belief.”

For additional information or tickets for Le Grand Cirque please call the Branson Tourism Center by calling 1-800-785-1550 or through its website, www.BransonTourismCenter.com.