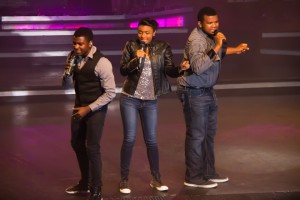 When the Cole siblings, Michael, Avery and Nadia burst onto the entertainment scene on the hit NBC prime time show “America’s Got Talent (AGT)” in 2009 as the “Voices of Glory” their story and musical ability touched America’s heart and took them to a fifth place finish in the Finals. Having seen their appearances on AGT and their Branson show recently, Ayo Starring Voices of Glory, recently, I feel very safe in saying that same story, charisma and talent, aged like a fine wine, that captured the hearts of America when they were on AGT, is now capturing the hearts of Branson audiences.

The story of how they came together and started singing to entertain their mother while she was in the hospital, in a coma, suffering and fighting back from the results of a horrible automobile accident, is as inspiring today as it was back in 2009. Their talent, both collectively and as individual performers has matured and is applied to a variety of music including, mostly cover songs and some original songs. Their original song, “You Sent A Miracle,” which is the story of the miracle involved with their mother’s survival of her accident set to music, was as beautifully performed as it was inspiring.

This show is not about glitz and glamor, it is presented in a concert format, with a live band, and is about the performers, their music and their ability to relate to and entertain their audience. From the time Nadia comes out, before the show begins to welcome the audience and answer questions, until the beautiful and inspiring patriotic ending of the show, it is a wonderful entertainment experience filled with warmth and beautiful music. “Ayo,” means “joy” and, whether it’s one of the group doing a solo or all of them singing together, each number is truly a “joy” to hear.

Their individual talents sparkle in numbers such as Michael Jackson’s “Superstition by Michael, Frank Sinatra’s “I’ve Got The World On A String” by Avery and the Whitney Houston classic, “I Will Always Love You” by Nadia. When they perform together in numbers like their original song “Ayo,” the Lionel Richey classic, “Dancing On the Ceiling,” the gospel segment or a variety of others, the power, familial harmony and beauty of their combined voices is truly a one of a kind musical experience.

And it’s not just their voices; it is the way that talent is artfully combined with a great band, costuming, choreography, large video screens, lighting and other special effects into a wonderful entertainment experience. The use of the large video screens showing the “Voices of Glory” singing “Holy, Holy, Holy” when they were younger that “dissolves” into them singing it live as part of their powerful Gospel music segment is a great illustration of this point.

The band, consisting of Tim Pope on drums, Jared Lee on base, Michael Kiersey on guitar and band leader Ray Harris on keyboards and trumpet enhances the total entertainment experience and was featured during many of the show’s vocal performances. The trumpet feature by Ray Harris, as Nadia performs “Blue Skies” is an excellent example.

As I observed some of the kids watching the show they appeared to be having as great a time as the adults. This is probably because they not only relate to the music, but to their “peers” who are performing it. This show is truly a “joy” to experience and one that the whole family can enjoy together from beginning to end.

For additional information on Ayo Starring Voices of Glory or for information or tickets for any of Branson’s shows and attractions or for lodging arrangements please contact the Branson Tourism Center, one of Branson’s largest and most respected vacation planning services by calling 1-800-785-1550 or through its website, www.BransonTourismCenter.com