George Dyer during the shows opening number “You Are Loved.”

Having seen and written about the George Dyer Show for each of the five years it has been in Branson and having just seen his 2014 show on September 5, I can say, without a doubt, this is his best Branson show ever and that’s saying a lot! I have previously described George as “Branson’s tenor extraordinaire” not only because of the power and beauty of his voice, which is one of the finest tenor voices I have ever heard, but his ability to connect to the audience and draw them into their own entertainment experience with a genuine warmth and charisma that provides an amazing and unforgettable entertainment experience.

We’ll comeback to George in a minute, but first let’s look at some of the other major elements in the show starting with his amazingly talented family, wife, Clarisse; daughters Kendra and Kassidy and son Mitchell who all perform during the show. Three of my favorite “family” numbers were the “Flower Duet, “from Léo Delibes’ opera Lakmé performed beautifully by Clarisse and Kendra; the performance of the song “At Last” from the 1941 movie “Orchestra Wives” by Kassidy, which was remarkable not only in terms of its vocal acuity, but a presentation that belies the fact that she is still in high school and Mitchell’s entertaining performance of the Fred Astaire classic “Singing In The Rain.” 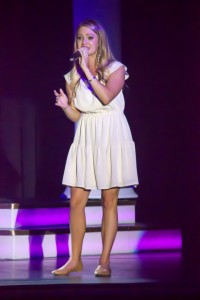 It has been my pleasure to watch Kendra Dyer develop as a performer over the last five years and in this show she really blossoms forth. From “Habanera,” the famous aria from the opera “Carmen,” to “I Dreamed A Dream” from “Les Misérables,” her original song “Surrender” and others, her performance was a joy to see and hear.

The shows live band consists of Ricki Holmes, Pianist and Band Conductor; Bogie Bohinc, Lead Guitar; Rob Wilson-Drums and Maryann Daversa, Keyboard. They were phenomenal not only in terms of their considerable musical talents, but in interacting with George and the audience at key times all of which combined to help make the George Dyer show the great entertainment experience it is.

From his opening number “You Are Loved,”  to the last note of theAndrea Bocelli‘s “It’s Time to Say Goodbye,” the power and beauty of not only his singing, but his genuine warmth, gives combine to give his audience something special   that I just have to believe will become a favorite Branson memory. Another  really neat thing is the way he gives a little “back story” on most numbers before he sings them which not only lets the audience know a little bit about the number itself , but helps set the mood. 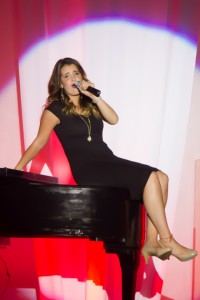 Kassidy Dyer during her performance of “At Last.”

I have previously written, “The magnificent rich tenor voice of George Dyer is just a joy to hear as he covers a variety of music as only he can. His singing would be enough, but when combined with his personality, interaction with the audience and the unique way he introduces each number the end result is a wonderful and unique musical entertainment experience without equal.” That has not changed one iota. From among many, three of my personal favorite performances would be “Bring Him Home” from “Les Misérables;””Hallelujah” with the delightful way he used the audience to set the performance up and “They Call the Wind Mariah” from “Paint Your Wagon.”

Although the vast majority of the show has no opera in it there is a unique and powerful opera segment featuring George, Clarissa and Kendra. Strangely, although I can’t read a note of music and didn’t have a clue what they were singing, two of my favorite performances were from that segment, Kendra’s solo of “Habanera” from “Carmen” and the “Flower Duet, “from the opera “Lakmé” that she sang with her mother. Although every number George sings in the show demonstrates why he is “Branson’s Tenor Extraordinaire,” it takes on a special relevancy when he sings opera. There couldn’t have been a better way to demonstrate that than to close the segment and first half of the show with his extraordinary performance of the popular “Nessun Dorma” from Puccini’s opera “Turandot.”

The use of the Josh Groben song “You Raised Me Up” as the basis of the Veteran’s Tribute was inspired. The acapella performance of the family singing “Nearer My God To Thee” was as soul touching as it was inspirational and exquisitely performed. As George sang the closing number, “Time To Say Goodbye,” it seemed as if the two hours had flown by and that the time to say goodbye had come all too soon. If you love great vocals, a beautiful tenor voice and want to be entertained and inspired you don’t want to miss this show.

For tickets or additional information on the George Dyer Show contact the Branson Tourism Center by calling 1-800-785-1550 or through its website, www.BransonTourismCenter.com.