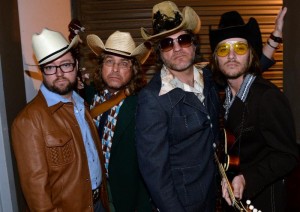 Paul Harris, 3rd from left, and the “Cleverlys.”

“Branson is well known for the quality and variety of its live shows and entertainment,” said Annette Wood, the Director of Sales and Marketing for the Branson Tourism Center. “Its great music shows, covering just about every genre of music, are legend, but, while perhaps not as well known, Branson is also blessed with a variety of some of the funniest comedians anywhere. From Branson’s longest performing comedian, the incomparable Gary Presley as “Herkimer” in Presleys’ Country Music Jubilee to the comical characters of Jarrett Dougherty at the Billy Dean Live show, the antics of Jamie Haage of the Grand Jubilee , the great standup comedy of Paul Harris from  Paul Harris and the Cleverlys and many others, Branson audiences are full of laughter every day,” she added. Wood said that the announcement this week about the future of Paul Harris, one of Branson’s longtime favorites, is both an example of the quality of comedians Branson has, but also their wit and humor. The announcement of his future plans, which still involves doing shows in Branson, was accompanied by a photo featuring him wearing a “standout” pair of sunglasses and Paul saying, “The futures so bright I gotta wear shades.” Recently Harris and The Cleverlys have had to make some changes to their Branson show schedule at the Starlight Theatre to accommodate some of the opportunities coming their way. One of those opportunities is touring” with the most awarded band in country music’s history, “Alabama.” In addition, Harris has become the national spokesman for Bad Boy Mowers,”the mower with an attitude,” built by American workers “right in the middle of the country in the Ozarks Mountains” and has a recording deal and a TV project in the works. The Starlite Theatre said that they are ecstatic about the possibilities for Paul and have been working with him on scheduling to free up time for these opportunities that are beneficial to both Paul and Branson. Harris said that he is appreciative of not only the theatres flexibility, but that of his fans. Branson Tourism Center’s Wood reminds those coming to Branson of the advice contained in the announcement saying, “Don’t miss your chance to see Paul before his craziness is unleased upon America in a big way!” She points out that even while taking advantage of these opportunities Paul Harris and the Cleverlys are scheduled to perform a number of Branson performances between now and the end of December. For their latest schedule, information and tickets please contact the Branson Tourism Center, one of Branson’s largest and most respected vacation planning services by calling 1-800-785-1550.